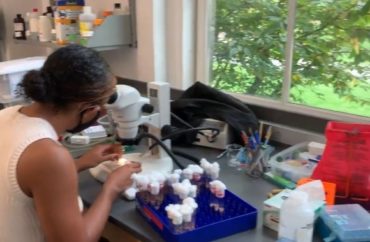 Multiple requests from The College Fix to Haverford College inquiring into its Department of Biology’s recent initiative to create a more equitable and “inclusive” biology curriculum have been met with complete silence.

The initiative was adopted by the biology department in reaction to a campus strike that erupted over the Walter Wallace shooting in late October, according to the school’s independent paper, The Clerk.

While the private college’s administration eventually capitulated to demands posed by the student strikers, the biology department was reportedly among the first to commit to substantial change.

“Before the strike had even ended, the department had discontinued classes for the remainder of the semester in order to focus on redesigning the curriculum with equity and inclusion in mind,” Haverford’s independent student paper reported in mid-December.

“All classes, including thesis sections, were canceled outright,” it added, noting that the department had also “adjusted thesis requirements and deadlines to reflect this change.”

Even as a majority of the students enrolled in biology classes were left to rely on recordings of last year’s classes to complete their coursework, Haverford’s biology department chose to offer a seminar on “Crafting an Inclusive Biology Curriculum,” the student newspaper also reported.

But when asked, the school refused to share how the biology department plans to change the biology curriculum and make it more inclusive.

Each time, The Fix had asked how the biology department intended to redesign its curriculum “with equity and inclusion in mind” and what specific steps it had taken or planned to take to do so.

The Fix had also contacted Maxwell Mondress, a student at Haverford and author of the article that announced the department’s plan to redesign its curriculum.

Although Mondress replied to The Fix’s email query, he avoided providing any specific answers and simply suggested that the biology department would be the best place to contact for current information on the biology curriculum’s changes.

Because the school has remained silent, it is unclear whether the biology curriculum has been redesigned or is still being altered.

The Clerk’s article had prompted debate on social media about the efforts within the biology department.

The Bio Department at Haverford College has cancelled all classes in response to student demands. They are now redesigning the curriculum around equity and inclusion.

Students who need class hours for visas can now take a seminar on "Crafting an Inclusive Biology" instead. pic.twitter.com/jZec7KoGjN

Alice Youle, a Haverford student who participated in Haverford’s “Crafting an Inclusive Biology Curriculum” seminar, indicated that the new seminar conformed with ambitions of the strike and the activists who organized it.

“I’ve definitely had to postpone a lot of in person lab work until next semester, but supporting the strike and engaging with the work the Bio department is doing to improve inclusivity is really important to me,” Youle told The Clerk.

Yet, even before the student strike, some Haverford students were actively involved in creating “more equitable classrooms” through a summer program called “Teaching and Learning Institute.”

According to a news release, while the program “initially began as a way to support planning for remote or hybrid instruction, as racial justice protests spread across the country in June, it became clear that an explicit focus on antiracist pedagogy was also necessary.”