Students will get paid for striking

Student activists launched the strike the night of October 28, according to campus paper The Bi-College News. It came after the fatal shooting of Walter Wallace by Philadelphia police officers on October 26. Bodycam footage shows that Wallace had a knife and the police officers warned him 11 times to drop it.

The strike included a vow to not attend classes or show up for campus work assignments.

One source emailed The College Fix claiming that “lot of bullying” was going on “to prevent non-striking kids from attending class,” but the tipster did not respond to further requests for comment. But an anonymous letter posted on the political science department blog did claim the strike had created a repressive, fearful atmosphere on campus.

Now, the administration has given in to the demands, according to the Bi-College News. 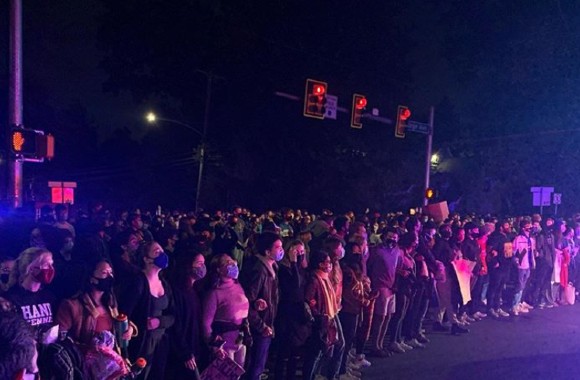 It reported a series of requests that the administration had granted, including $75,000 for renovating the Black Cultural Center and another $75,000 over two years for bias training.

The activists also won “compensation up to 20 hours of missed work while participating in strike” and a “Pass/Fail model” for the fall semester.

The full list of commitments is laid out in a spreadsheet titled “Anti-Racism Commitments 2.1.”

The university rejected some of the demands, however. For example, activists demanded a return of “institutional land” to Native Americans, but the officials said it could not “return institutional land without ceasing its educational mission as currently realized,” according to the spreadsheet.

It also refused to apologize for employing a white chief diversity officer.

It began with hundreds of students in front of Founders Hall, leading in chants of “No justice, no peace,” the campus paper reported. That slogan is popular with Black Lives Matter activists.

“We are sad and troubled—as individuals and as Haverford leaders dedicated to anti-racism and social justice at Haverford and beyond,” according to an email published by Bi-College News. “While we all might be tempted to join protests about this tragedy, we are imploring you to temper that impulse. Now is not the time to go to Philadelphia.”

The students called the email “deeply inappropriate” and “insensitive.”

Immediately, students groups such as Black Students League, Women of Color House, and Black Students Refusing Further Inaction organized a strike, imploring students not to go to class, athletic practices, or any events associated with the college as a sign of protest.

An Instagram post circulated by the student groups announced the protest, reading in part “F**k a silent protest.” These groups also sent an email to the president and the dean, attacking their response and calling it “a tipping point,” according to the campus paper.

tell your friends to pull up.

“We are appalled by the institutional inaction and silence of which the President’s email is symptomatic,” the email read. “Haverford routinely ignores the plight of BIPOC students, while servicing platitudes and plans never delivered upon.”

So far, there does not appear to have been any arrests related to the initial protest or the subsequent strikes.

“No one has been arrested or [students] cited,” said John Viola, the Haverford Township police chief, in an email to The College Fix. “The students had a protest on college grounds and continued the protest on College Ave and Haverford Road.”

“Police blocked the road and allowed the students to protest, there were no altercations with police with the exception of vulgar insults  directed at the Police Officers,” he said.

When asked about plans to protect students or keep protests from turning into riots, Viola said the department “is prepared to respond to any situation, [but] I will not share any operational plans.”

A strike document released by the protesters accused the school of “violence against disabled students” and listed a number of other demands.

The College Fix reached out via email on Wednesday to an email address listed on a graphic promoting the strike but did not receive a response. The Black Student League, one of the groups involved in the strike, did not respond to an Instagram message from The Fix on Wednesday.

The Fix had asked how long the students planned to strike for and to explain what the students meant by “violence against disabled students.”

However, not all the students were on board with the strike.

An opinion piece, anonymously published on the university’s political science department blog, explains the opposition from some students.

The strike “claims to be in support of ending police brutality and protecting people of color” but “has done more to divide our campus and vilify members of our community than anything I have witnessed during my time at the college,” the writer said.

The writer criticized anti-cop chants, which that portray “all officers as bad people.” The author defended the main message of unity from the email from the administrators.

“As for the list of demands drafted by the strikers, I believe they advocate for unequal treatment, and dare I say discrimination, against certain members of the community based upon the color of their skin,” the opinion piece said. “We should pride ourselves in our fair and balanced grading, which should seek to judge students solely based on the quality of their work rather than any part of their identity.”

The repressive environment that the strikers have tried to impose upon our campus only works if we let it. You all have the power to speak up. It is not easy, but it is important. If you want to go to class, do not be afraid to tell your professors. Do not refrain from going to your clubs because you are afraid of being judged. The tactics of the strikers to end dissent and squelch opposition through moralistic pronouncements depends upon the silence of those of us being told to not speak.

The Fix reached out to the anonymous author via the email listed in the opinion piece but did not receive a response.

About the Author
Adam Burnett
College Fix contributor Adam Burnett is a student at Illinois State University majoring in journalism with a minor in political science. Adam enjoys exercise, political debate, reading, and working on cars.