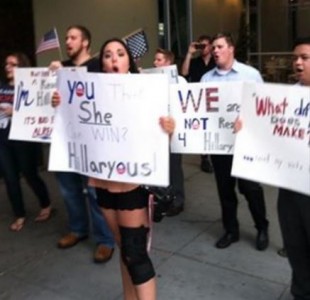 “The College Republicans at Sacramento State outshined the Democrats at their own ‘Ready for Hillary’ fundraiser … They eventually gave up their counter-protest and shut all the doors and windows.”

When Sacramento State University student Lauren Lombardo and her peers found out the Ready For Hillary Clinton PAC was hosting a fundraiser in their town, the students decided to show the group just how they felt about the possible presidential contender.

As members and guests arrived at the fundraiser Tuesday night at the downtown Sacramento pub KBar, Lombardo and her friends met them at the door for a little meet and greet.

Chanting and hoisting posters that read “Please only one Clinton” and “We’re NOT Ready for Hillary,” the students – members of Sacramento State’s College Republicans – made it clear that not all Millennials are guaranteed Hillary Clinton voters. “This event was not going unnoticed,” said Lombardo, 20, president of the university’s College Republicans.

In fact, Lombardo said her group of roughly a dozen students was so boisterous that members of the Ready for Hillary PAC put together a counter-protest, sending about 20 people out to challenge the College Republicans with posters and chants of their own.

But the College Republicans were fired up, Lombardo said in an interview with The College Fix on Thursday.

“Every single member there honestly believed in what we were fighting for,” she said of her group. “We had the opportunity to highlight Hillary Clinton’s obvious tax and spend policy.”

“We are college kids, and in a couple of years we are going to be out looking for a job, trying to survive, and these people are leaving us with a job market that’s impossible to survive in.”

Eventually the counter protesters went inside, but the College Republicans were just getting started. As former Michigan Governor Jennifer Granholm began her keynote speech inside KBar, the students’ chants escalated, Lombardo said.

“We switched between three different chants: ‘It’s bad enough already,’ ‘No more Clintons,’ and ‘hey hey, ho ho, Hillary Clinton’s got to go,'” she said. “They had to shut all the doors and windows so they could carry on their fundraiser because our protest was too loud.”

Pictures posted on the group’s Facebook page offer a montage of the evening, under the description: “The College Republicans at Sacramento State outshined the Democrats at their own ‘Ready for Hillary’ fundraiser tonight. They eventually gave up their counter-protest and shut all the doors and windows.”

Lombardo said the effort was a success, and showed Clinton supporters and Sacramento in general that many college student are not all Hillary Clinton fans.

“We don’t want the people of Sacramento to think she’s coming up and everyone’s OK with it,” she said. “It’s not that we are not ready for Hillary, it’s Hillary’s not ready to lead the country. She hasn’t done a good job in the past.”