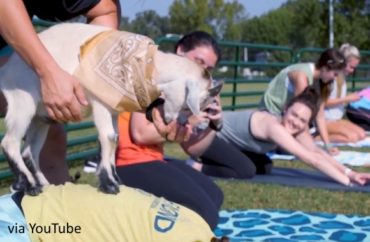 Dozens of universities from coast to coast have hosted goat yoga events this year, promising students a chance to unwind with the farm animals to help cope with the stresses of college life.

A UT Chattanooga event last month billed it as a chance to “de-stress and engage in self care.” At a CU Boulder over the spring, the students pet the goats in between poses and tried to maintain their posture as the goats came up to them in curiosity. At St. Cloud State in September, goat yoga was part of a larger “Cloudfest” that included free food, a large sandpit and friendly puppers.

“Obviously, college students are at a stressful time in their life. It’s just something you can do to just relax for an hour and a half, half fun and laugh, and just get lots of love from an animal who is super fun and loving and goofy,” goat yoga expert Melanie Hiestand told The College Fix.

Goat yoga is regular yoga, but with small goats that join in. The creatures meander around and frolic on backs and underneath downward dog poses as participants enjoy communing with the animals while getting their stretch on. Sometimes they stare, other times they nibble on grass. Instructors even place the small goats atop students’ backs for muscle tension relief.

Hiestand, with the Original Goat Yoga, said the idea to mix yoga and goats started about two years ago by Lainey Morse.

“She (Lainey) had been diagnosed with an auto-immune disease and also was going through a divorce, just going through a really hard time, and so she just used her goats as a therapy for her and she would invite people over to spend time with her goats,” Hiestand said.

“She just had a random big get-together and had a yoga instructor there one day and people on her farm and the yoga instructor suggested maybe incorporating the goats into the yoga.”

Not long after Morse tested out the idea of goat yoga, she had a waiting list of around 2,000 people for her classes, according to Hiestand.

The animals are pets and are not harmful to participants, he said.

“I would describe the experience as positive and interesting. Yoga is all about getting in touch with your mind, body, and soul, and there is something so relaxing and peaceful about doing yoga in the outdoors with goats around you,” Gonzalez said.

While the goats did not climb on her back or nibble on her, Gonzalez said some of them would sit and stare at her. She said it was a unique stress reliever.

“I actually took the class around finals week during my last year and it took a lot of the stress I had away,” she said. “It’s beneficial for students because it provides a different outlet of stress relief.”

She likens the experience to playing with dogs during finals week.

“I think it is becoming popular with students because of the stress-relief that yoga and animals provide,” she said. “The best way I can explain it is comparing it to playing with puppies at the library during finals. Those few moments that you take from the daily busy schedule to just sit and play around puppies makes a big difference on how you go about your day.”