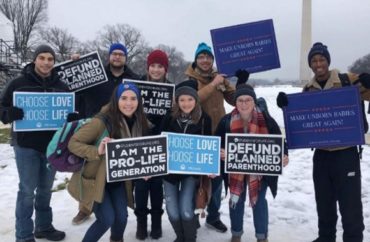 Some believe this could be the last year of Roe v. Wade

Pro-life students and conservative organizations once again traveled to D.C. for the March for Life, two years since the last full pro-life event occurred in the capital.

Students came from groups such as Students for Life of America, Young America’s Foundation and many other pro-life and conservative groups from campuses across the country.

Pro-life activists shared with The College Fix why they continue to fight against abortion.

“I’m pro-life because every life is beautiful and it’s really unfair to judge, with no basis, the worthiness of someone’s life and we’re all thankful enough to be alive and be here today and everybody should have that chance,” Catholic University of America student Alessandra Sommers told The Fix.

“I’m pro-life because I think that abortion is the accepted form of genocide. You’re killing 60 million people since 1973 this country alone and you have to think about how many people including families would exist if that hadn’t happened,” Hoskins said. “To me it just seems like A universal we accepted method of genocide and that’s just outrageous. It’s the biggest human rights abuse of our time.”

“I went to the March for life this year to be in community with my school and to use the fact that we are young people as a witness to our faith and life,” one student said. “But most of all because I love the human being and want to recognize and uphold the dignity of human life.”

“I go to the March and continue to go to the March every year because I don’t want to have to go. I want to create a better world by creating a world where abortion is unthinkable,” another student told The Fix. “When my mom was pregnant with me difficulties surrounded the pregnancy. The doctor advised to abort which my mom, being a strong Catholic, said no to.”

“In a strange way, that kind of makes it more personal for me,” he said.

As usual, students led the March for Life. This year, high schoolers from nearby Immanuel Lutheran High School and students at Christendom College were picked to lead the march.

And likely traveling the furthest by car or bus is the University of Mary, a Catholic college in North Dakota. The Catholic university regularly sends students on a 3,066 mile-round trip pilgrimage to speak out against abortion.

Our group in DC is ready to go! Joyfully witnessing to life at the @March_for_Life 💙🧡 #LifeatMary pic.twitter.com/w8HT5lSIJD

Some have expressed optimism that future Marches for Life could celebrate the end of Roe v. Wade and a “post-Roe America” if the Supreme Court reverses the 1973 decision in a pending case involving a Mississippi abortion law.

“There is a very big feeling in the pro-life movement and with the young people we work with that something very big is on the horizon,” Kristan Hawkins, the president of SFLA, told the Washington Post.

“Roe being reversed really is only the beginning, and that’s what we’ve been preparing for,” Hawkins said. “Having this army for this ground game of this fight that will go state by state.”

Her organization, and others, will hold a National Pro-Life Summit on Saturday to continue training and strategizing for a post-Roe America.