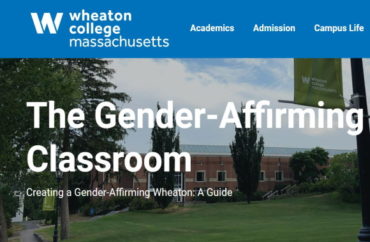 Wheaton College in Massachusetts has published a lengthy guide with recommendations for professors to “make classrooms more affirming and inclusive for students of different genders.”

The document includes a section dedicated to the “Natural Sciences” that tells instructors who teach about sex differences, sexuality or reproduction “to consider using terms that are both more precise and which better account for these bodies and experiences.”

The guide also advises against the terms “born female” or “biological male.” Instead, use “assigned [male/female] at birth,” the guide states.

It also encourages the terms “People with uteruses,” “people who menstruate” and “pregnant people” instead of “women” or “females.”

This “helps to specify the relevant organs or biological processes, instead of making assumptions about the identities of the people in question,” the guide states.

“…This specificity matters for trans and nonbinary students in class, but also for anyone who, for example, might become a healthcare worker—inability to access competent and sensitive medical treatment (not just transition-related health care, but also basic preventive and acute medical care) is a persistent problem for transgender people.”

“The Gender-Affirming Classroom” online manual also provides professors at the small private college with detailed instructions on how to establish an inclusive environment from the first day of class through the semester’s end.

“When you introduce yourself to students, consider sharing your own pronouns; if you typically ask students to introduce themselves, too, you can invite (but not require) them to share their own pronouns at that time,” the guide states.

The guide also tells professors to collect information sheets from students with their names and pronouns on the first day of class. Using the sheets for attendance at the start of the semester helps professors “avoid deadnaming or otherwise misgendering a student” who uses a name that differs from the official roster, according to the guide.

After the first day of class, professors are encouraged to maintain an up-to-date roster of names and pronouns to ensure that they do not call on a student using incorrect or assumed pronouns.

“If a student hasn’t told you their pronouns—or if you can’t remember—don’t assume based on how they look. (If you couldn’t recall a student’s name, you wouldn’t call them Chad just because “they really look like a Chad,” would you?),” the guide states.

The guide also provides tips for course content, advising professors to include material by authors and creators of different genders. Instructors should also “acknowledge when a text uses outdated, exclusionary, or hetero/cis-normative language.”

“Many texts contain outdated assumptions about sex, gender, and sexuality (for example, that all people are either ‘men’ or ‘women,’ that all married men have a wife, or that all pregnant people identify as women). For trans and nonbinary students, especially, such texts may make them feel invisible or invalidated,” the guide states.

When contacted by The College Fix for a request for comment, Wheaton College only pointed to another policy, its Student Name, Pronoun and Gender Identity Policy.

“Wheaton believes embracing diversity leads to personal growth, intellectual enrichment, freedom and social justice. Being a part of Wheaton means appreciating and celebrating our differences. It also means maintaining an environment free from discriminatory conduct, including conduct that impedes the academic freedom, security, or well-being of any member of the Wheaton community,” the introduction to that policy states.

Reached for comment, a spokesperson for the Academic Freedom Alliance said it has no comment at this time on whether professors often face pressure to follow such guidelines and face consequences for not doing so.