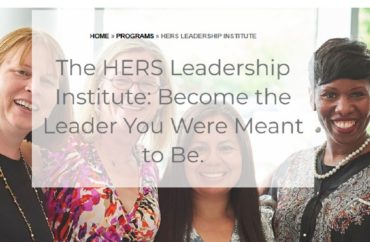 The Department of Education’s Office for Civil Rights recently opened a Title IX investigation into Colorado State University for its promotion and support of an upcoming female-only leadership program.

Title IX of the Education Amendments of 1972 prohibits discrimination on the basis of sex in education if those institutions or programs receive federal funds.

The OCR informed Professor Mark Perry on January 31 that it had opened an investigation following a federal complaint he sent the Education Department. Perry, a professor at the University of Michigan Flint, filed the complaint in December after learning about an email from CSU’s Office of Inclusive Evidence.

The public university promoted the HERS Institute, a leadership training opportunity only open to women. The email, reviewed by The College Fix, said CSU has been in support of the program since 1985– this year the event will be held at the University of Denver in June. 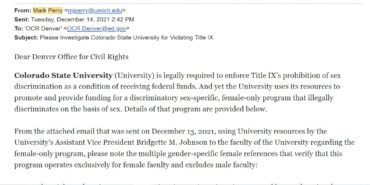 The Fix contacted the OCR about the status of the investigation, specifically asking when it will be completed. Spokesperson Alberto Betancourt confirmed that the OCR had opened an investigation into CSU but declined to comment further.

The Fix also contacted university public relations staffers Jennifer Dimas and Jeff Dodge to ask for comment on the complaint and if an attorney reviews programming to ensure it is legal. They did not respond to three emails sent in the past two weeks.

The HERS Leadership Institute, is a leadership program designed solely for women, though it is open to all participants “who identify as women.” Perry asked the DOE to investigate it as a violation of Title IX’s prohibition on sex discrimination in education, because it gives opportunities to female employees that are not open to male employees.

He told the civil rights office:

In violation of Title IX, the University is using its resources (administrators, email, etc.) to promote a program that discriminates on the basis of sex and is also providing funding for female (only) faculty members to participate in this single-sex, female-only program. Please investigate the University for violating Title IX’s prohibition of sex discrimination.

The university offered tuition and housing for female faculty or students who participate in the HERS program. Professor Perry said the university directly violates Title IX and could forfeit its right to federal funding.

CSU and other campuses regularly promote or host HERS program

According to Perry, this is not the first time CSU has promoted the HERS institute nor the only school to support it.

Perry told The Fix that Colorado State could be required to drop all support for the HERS Institute if the Office for Civil Rights investigators conclude it violates Title IX.

This would include stopping all communications to promote the leadership institute as well as the immediate cancellation of funds covering housing and tuition for participants.

Perry has filed over 400 similar Title IX complaints against Universities who fund institutions that he alleges discriminate based on sex, race, or color.

“I have successfully challenged the double-standard for the enforcement of Title IX and Title VI,” Perry said. “With more than 100 resolutions to date in my favor from my complaints to the Office for Civil Rights.”