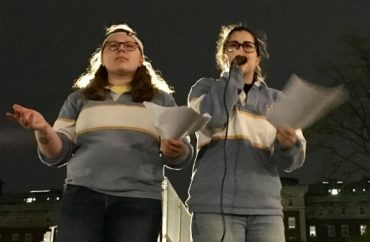 President, a First Amendment scholar, ‘is censoring the Band’

NEW YORK — The Columbia University Marching Band was greeted by seven security guards Friday when it performed its finals-week comedy skit, a tradition that stretches back four decades.

For the second semester in a row, the band was forced to play on the lawn outside the library for “Orgo Night,” which is traditionally held at midnight the day of the organic chemistry (“Orgo”) final exams.

The administration’s posting of a small army of guards seemed intended to deter students from storming inside.

The band was prohibited from playing in the library – its home for the skit until last December – following a spike in student opposition to Orgo Night in recent years, including a sit-in and op-eds calling the politically incorrect skits “unsafe” and “triggering.”

Band alumni are accusing the administration of giving a fake content-neutral rationale for closing off the library to censor the band. They are appealing to Columbia President Lee Bollinger, a prominent First Amendment scholar. The band began its jolly mockery of Columbia leaders, institutions and students by riffing about this winter’s dining hall debacle, in which a burst pipe shut down the late-night dining hall for weeks.

The administration’s solution was to spice up the menu in another dining hall.

“Step JJ’s [the new dining hall option]  revealed Real JJ’s [the broken dining hall] for the deadbeat dad that it was,” said one band member, leading another to muse about what else would get better if something else “accidentally broke.”

“What if the whole Columbia administration slipped on a banana peel and were replaced with automatic template emails?”

Other targets of the band included the administration’s response to sexual assault and comments attributed to the recently departed president of Barnard College, Columbia’s women-only sister school, that “a lot of” adjunct professors don’t need health benefits because “their husband’s on Wall Street.”

The band concluded by poking fun at a recent student senate meeting that narrowly voted against adding an anti-Israel boycott, divestment and sanctions (BDS) referendum to the ballot.

“We at Barnumbia University of Orthodox Judaism know the only thing that can really get students riled up is Israel,” they said, referring to the large Jewish population on campus. Earlier in the semester, Columbia University Apartheid Divest lobbied to include a referendum on whether students supports its BDS campaign.

“Let’s be frank, the [student government] is too afraid to take a stance on the Israel-Palestine conflict because they just care about getting re-elected,” the band said.

It turned towards the audience: “One side of this conflict is clearly in the right… and that side is… let’s all say it at the same time…”

The crowd erupted in a muffled chant as students screamed “Israel” and “Palestine” at the top of their lungs. “Yeah exactly, that’s the one!” one of the band members quipped.

‘Obfuscation and outright lying to alumni’

A shadowy group of alumni has been lobbying the administration to reverse the decision, publishing 12 open letters under the pen name “Hamiltonius.”

One recent letter was signed by more than 60 alumni, who graduated as far back as the 1960s. It said the administration’s real rationale for the no-library change was to “appease the small number” of students who are offended by the band’s jokes.

Samantha Rowan, president of the Columbia University Band Alumni Association and Orgo Night participant in the 1990s, told The College Fix she would “love to sit down and talk about this with the administration.”

The library is the best place for Orgo Night, because “libraries are the spiritual and intellectual center of universities and the natural gathering place for students,” she said. “Orgo Night was as big then as it is now and it was an amazing experience to walk into [the reading room] and see the room filled with our classmates and peers.”

She called the administration hypocritical for justifying the Orgo Night removal by saying the skit was “disturbing students who are studying.” Rowan alleged that the administration has proposed putting “live music” in the library during study breaks.

Kevin Chapman, a 1980s Columbia graduate with a child at the university, wrote an op-ed in the school newspaper last semester arguing that the administration’s decision may amount to “implicit censorship.”

“The disruption facade is so transparent that it is laughable,” he wrote. “Any student who wants a quiet study space at midnight” would not choose the well-advertised space that Orgo Night has always used.

Chapman believes the content of the skit was “the only reason why this decision was made,” he told The Fix in an email. “President Bollinger refuses to admit that fact because it would run counter to his public persona as a defender of free speech.  Instead, he is censoring the Band.”

Chapman also noted the band’s leadership is cognizant of going too far. Previous Orgo Night festivities have been advertised using references to Kim Kardashian and the Gaza Strip, for example.

“The fact is that the current Band leadership has made a concerted effort in the past couple of years to be sensitive to the content of the show,” Chapman said, knocking the administration for not “paying attention” to how content has changed.

He also said the administration was guilty of “obfuscation and outright lying to alumni” by claiming it was “working closely” with band leadership on future Orgo Night activities, “when in fact there was no such engagement with the Band.”

Columbia did not respond to a request for comment on why so many security guards were needed to supervise a gathering of band geeks.