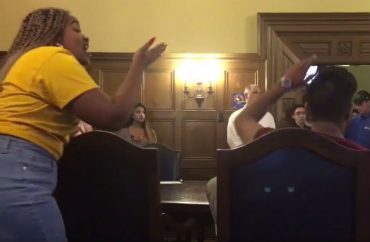 His purported publicist says he has a police escort

The student body president at UCLA claims he received a “flurry of threats” during his last days in office because of a dust-up on social media over his appropriation of black gang culture.

In a Daily Bruin op-ed Wednesday, Danny Siegel broke a week of silence following a contentious student government meeting where he was denounced for a year-old photo showing him making the Bloods gang sign.

Siegel’s silence left the student government’s official spokesperson to speak in his name and try to convince news organizations to remove their coverage of the incident, suggesting Siegel was under threat of gang violence.

Dozens of students overfilled a regularly scheduled Undergraduate Students Association Council (USAC) meeting May 2 to demand Siegel’s resignation because of the leaked photo.

“We’re coming for you,” said Afrikan Student Union chair Alicia Frison, “if you guys don’t respect us and our communities.” She did not immediately respond to a Facebook message Tuesday clarifying whether she meant challenging their re-election campaigns or forcing their resignations.

Warning for his black staffers: ‘White supremacy will never protect you’

Siegel apologized for his “narrow-mindedness and total disrespect” in a Facebook post the day before the explosive meeting.

“I want to be up front,” he wrote before removing the post after the meeting. “[T]his is a result of my white privilege and lack of perspective, something that so many victims of gang violence don’t have the luxury of, in fact this behavior can put their lives at risk.”

At the USAC meeting, councilmembers approved several measures suspending time limits after students continued to speak past their allotted time, and non-undergraduate students demanded the chance to speak.

“There’s a saying that if you’re not at the table, you are on the menu,” said an unidentified man, referring to the heavy representation of white councilmembers relative to black students. He spoke in favor of suspending bylaws on public speech as a way of giving black students a seat at the table.

Dozens who spoke during the public forum said they were angry Siegel had appropriated a gesture from the predominantly African-American gang.

“I hate to reinforce the angry black woman stereotype, but you force me to,” a woman told Siegel.

Several students accused Siegel of tokenizing minorities on his staff. One woman directed her comments at Siegel’s black staffers sitting at the table.

“White supremacy will never protect you,” she told them.

Siegel interjected unsuccessfully several times during public comments when protesters became disorderly, but he offered little to defend himself. Before the meeting broke for recess, one woman asked for his “response to this.”

Siegel recused himself from answering, invoking bylaws that apparently prevented him from speaking.

Others accused his staffers of complicity for not acting after knowing about the photo for a year.

“All you guys saw that [photo] and you said nothing about disrespecting culture,” said Kaitlyn Walker. “I dare you to go to any [housing] project,” she told Siegel. “Put up that sign and see what happens to you.”

One woman said his actions were unbecoming of someone who identified as a progressive.

“A lot of people who I’ve talked to about you have said you don’t hate black people, that you’re liberal,” said the woman, who did not identify herself. “‘Liberal’ in what sense? I was just wondering if that’s disgraceful: someone who claims to be liberal and does shit like this?”

Eight days later, Siegel defended himself in the Daily Bruin.

He said he faced a “flurry of threats” following the meeting, requiring “both [UC Police Department] and administrative intervention,” and that his critics “practiced the exact intolerance they criticized.”

Siegel’s opposition used “this [incident] to tear down the rules of civil engagement and threaten, intimidate and bully those they disagree with.”

“The goal of this ‘resentment’ toward the other, or the unlike, has become intimidation,” he wrote. “The result has been to intimidate everyone into silence, and stifle honest conversation. Instead of resentment, let us try reconciliation.”

The College Fix postponed publishing this article last week to continue discussions with USAC Publicity Chair Sara Zaghi, who claimed Siegel was facing threats because of the publicity.

She had contacted The Fix May 3, allegedly on Siegel’s behalf, asking for the removal of a blog post citing reporting by Daily Bruin and an embedded social media post showing Siegel’s gang-sign photo.

Zaghi claimed she had also contacted the Daily and The Tab to request takedowns, saying Siegel feared it could “instigate gang violence against him.”

“Danny has received more threats and will be getting a UC Police escort for his safety,” she told The Fix in an email Thursday. In a followup phone call, Zaghi said Siegel was “not doing so well” but clarified the threats against him were “mostly” coming from “students,” not gang members. Siegel was attending his last exams Thursday before his graduation, Zaghi told The Fix. She agreed to arrange an off-the-record teleconference between Siegel and The Fix, but she did not return a call Thursday afternoon, when the interview had been scheduled. (He did not respond to a Facebook message Tuesday night.)

Fox, CBS and the Los Angeles Times had honored her requests to take down articles about Siegel’s controversy, according to Zaghi.

But when The Fix asked the Times for its editorial stance on removing articles about an individual, a spokeswoman said “it doesn’t appear that we’ve covered this story” in a Thursday email.

Daily Bruin, the official student-run newspaper at UCLA, said it would not comply with Zaghi’s request.

“Members of Danny Siegel’s office contacted at least one of our News writers (someone completely uninvolved in the reporting of this specific story),” Daily Editor-in-Chief Tanner Walters told The Fix in an email Thursday. “Our writer told them we don’t remove published content, so I think that’s where it stopped.”

CBS did not respond to an email from The Fix Thursday.

The Fix has tried to verify whether Siegel had requested campus police services last week. A university spokesman said in a phone call Monday that he would refer the query to his superiors.

UPDATE: Danny Siegel broke his silence in a Daily Bruin op-ed Wednesday, saying he faced a ‘flurry of threats’ that required ‘both [UC Police Department] and administrative intervention.’ The headline and the body of the article have been amended to include Siegel’s new comments.