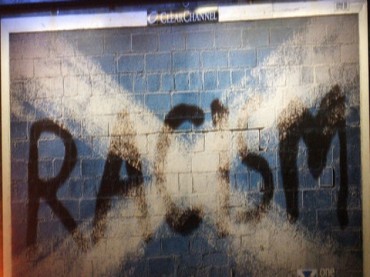 Two members of the Bryn Mawr College rowing team hung a Confederate flag in their dorm, and taped a “Mason-Dixon line” across the dorm floor in what they claimed “was merely a display of their Southern pride.”

The incident led to some 500 people protesting at the small women’s school just outside of Philadelphia, and a petition to have the offending students removed from their dormitory.

“I shouldn’t have to walk past a Confederate flag on the way to my Black American Sociological Perspectives class, where we literally watch videos and learn about how that flag represents hatred and the lynching of people that look like me,” said Bryn Mawr senior Allegra Tomassa Massaro, president of the NAACP, Tri-College Chapter. “That should not be part of my college experience.”

The Bryn Mawr administration, through student leaders, asked the students to remove the items from the hall Sept. 12, the day they learned of it. But the controversy continued after the students then hung the flag in their room at Radnor dorm, visible from their window that looks out on the college center.

“Our intention was never to cause the pain the community is currently suffering,” Rachel Hager, a senior from Bellaire, Texas, and V.F., a senior from Alpharetta, Ga., wrote to their hallmates Sept. 18.

As a result of the incident, Bryn Mawr “created a committee to explore how to better deal with issues of racial intolerance and diversity.”

Students condemned the administration for not speaking out sooner, and some claimed Hager and V.F. didn’t show sufficient remorse.