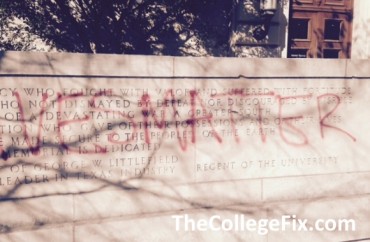 A large wall etching honoring “the men and women of the confederacy” and other memorial statues were defaced with Black Lives Matter graffiti late Tuesday or early Wednesday at the University of Texas at Austin.

“University police were notified at 7:55 a.m. of the graffiti on the South Mall,” said J.B Bird, a spokesman for the campus, in a telephone interview Wednesday with The College Fix. “Clean up happened almost immediately, the statues are free of graffiti, and the police department is investigating the matter.”

The memorial area is no stranger to defacement, it’s been targeted by vandals many times over the last several years, and in fact campus leaders removed statues of Confederate President Jefferson Davis and U.S. President Woodrow Wilson last fall to appease student protestors who complained Davis was a “racist symbol of slavery.”

The move came after the student government last spring also passed a resolution calling on campus leaders to remove the Davis statue, with their student president saying at the time “Jefferson Davis stood for some things that are pretty abominable today; Slavery, racism. They’re just not in line with the university’s core values.”

A 12-member task force of UT alumni, students and faculty members also weighed in on the decision to remove Davis from students’ sight.

Campus leaders have considered “placing a plaque on the mall to provide historical context for the remaining statues and for an inscription west of the Littlefield Fountain that pays tribute to the Confederacy and Southern patriotism.”

It was that inscription hit with graffiti. It reads:

To the men and women of the confederacy who fought with valor and suffered with fortitude that states rights be maintained and who, not dismayed by defeat nor discouraged by misrule, builded from the ruins of a devastating war a greater south, and to the men and women of the nation who gave of their possessions and of their lives that free government be made secure to the people of the earth this memorial is dedicated.

Bird, the campus spokesman, would not say whether cameras are trained on the area.

“We don’t talk about anything related to law enforcement tactics,” he said. He did, however, say that “the university does not condone the defacing of public property.”

He declined to comment on whether campus leaders feel frustrated over this new batch of graffiti considering the massive effort they underwent last year to appease student protestors by removing the Davis statue from the mall.

“Universities across the country deal with the defacing of public property,” he said.

The statues of Wilson and Davis remain in storage as campus officials fundraise to install them in their new homes – Davis in the university’s Dolph Briscoe Center for American History, and Wilson at an exterior location on campus. Wilson was removed in order to maintain symmetry in the Main Mall space – as it stood opposite the Davis statue, campus officials have said.