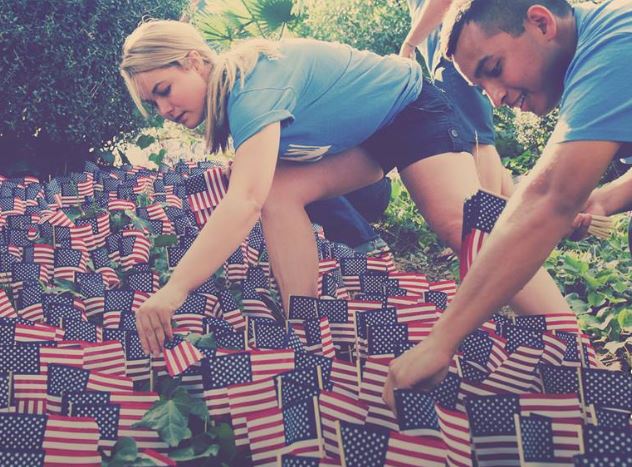 Most of today’s college students were in elementary school on Sept. 11, 2001, and for many of them, their memories of that day 12 years ago are fuzzy.

But as they’ve grown up under the shadow of 9/11 and learned more about the day, they too have come to experience the sense of pain and loss over the tragedy – prompting them to do their part to honor the fallen.

Conservative students at more than 200 colleges across the nation today remembered and paid homage to those who lost their lives in the Sept. 11 terrorist attacks through “Never Forget” memorials.

Students involved in the observances, mostly College Republicans and members of the conservative Young America’s Foundation, planted 2,977 flags in their quad, one for each life lost on 9/11. Many also took a moment of silence at 9:11 a.m., and brought in guest speakers. Students also donned buttons, hung posters, and distributed materials to peers to pay their respects to the memory of the tragic day.

“What makes this project so moving is once you realize that each flag represents a human life, it truly adds perspective to how horrific the attacks actually were,” Nathan Brand, president of the Hillsdale College Young Americans for Freedom, told The College Fix.

Brand said the project is important because it serves as a strong reminder and teachable moment for students too young to remember the tragedy.

“Seeing the ground covered with the vast number of American flags, students will walk away impacted,” he said. “The project provides a great opportunity to reflect on the value of life and the freedoms we often take for granted.”

University of Colorado-Boulder student Aslinn Scott, a member of the campus College Republicans who has helped set up the display every year for the last four years, said sometimes students yell at her as she plants flags – but more often than that random students walking by decide spontaneously to help out.

“I am trying to honor someone who unjustly died,” she said. “The fact that people stop and help matters more than the one person yelling at you, saying you’re perpetuating war.”

She said while it seems mostly campus conservatives and College Republicans are the ones who organize the memorials on campuses, the effort truly transcends politics, and even patriotism.

“This is what coming together as a community means,” she said. “In a way you can say that is patriotic, but it’s also a coalition of our community.”

Young America’s Foundation helps colleges and high schools organize and fund their Never Forget projects in part to keep the memory of the day’s victims alive and share that on campus.

“We started this project in 2003, when 9/11 was still a recent memory,” states Ron Robinson, president of Young America’s Foundation. “Today’s college and high school students were between three and eleven-years-old when radical jihadists viciously attacked our nation on Sept. 11, 2001. As students become less personally connected to the events of 9/11, the more important … (the) Never Forget Project becomes.”

For the most part, the only cost to student activists who bring the project to their campus is $390 for the 2,977 flags, and those expenses are often underwritten by conservative nonprofits, fundraisers, and parent support.

Hillary Cherry, a spokeswoman for YAF, said the project has grown a great deal. The 10th anniversary two years ago was the largest ever for the project with 300 schools participating, but this year has become especially important, as the Muslim American Political Action Committee has planned a march to coincide with the terrorist attacks, she said.

The Million American March Against Fear is for, what the groups says, “peace, harmony and justice.” They state on their website that the government has “failed to protect Constitutional liberties and human life” and that they have been ignored.

“The whole ‘terrorist threat’ is a hoax invented by fear-mongering politicians to control our minds and pick our pockets,” wrote Rabbi Alam and others online in defending the event.

For YAF, however, the Never Forget Project isn’t about politics, current policy or money, but rather respect, saying it’s “as much about honoring the victims of the attacks as it is honoring the American principles for which they died.”