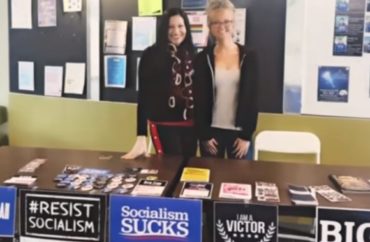 A man allegedly stalked and then attempted to hit with his car a South Seattle College student and president of its conservative Turning Point USA chapter in an apparently politically motivated attacked.

According to student Katie Daviscourt, she had been staffing a recruitment booth last Thursday when a man approached her and berated her signs supporting small government.

In a lengthy Twitter statement, Daviscourt said he vandalized her signs and stole a few.

She claims he said to her that her “organization’s views were way off base” and that she should not even have the right to call the police to report him for vandalizing and stealing her signs because of her small government views.

Daviscourt stated that she next saw the man in the parking lot and that he “waited for me in his car and tried to hit me with his vehicle twice as I was walking.” She added he hit another car as he sped away in an apparent attempt to flee the scene.

In a statement to The College Fix on Monday night, Daviscourt offered an update.

“My school has been very vocal about how horrible this event was and have given me their support,” she told The Fix. “They have offered to have campus security escort me to and from class. However they will not let me know the suspect’s name and I am unable to file a restraining order because of this.”

“The Seattle Police Department continues to fail me,” she said. “They are not taking this incident seriously. And my suspect remains on the loose while my name is plastered all over local media. I have let them know that I fear for my life and they do not care.”

“If this occurrence is to happen to another student, I advise them to go after the police as strong as possible. Never give up until the perpetrator is arrested and charged,” she added. “I hope this incident doesn’t stop other patriots from wanting to be part of Turning Point USA. This country needs conservative voices more than ever. … Never stop standing up for your beliefs.”

The College Fix attempted to contact the Seattle Police Department and South Seattle College for comment on Monday. They have yet to respond.

Breitbart News, which first reported on the matter, described what the video surveillance of the incident shows:

The video footage obtained and reviewed by Breitbart News shows a black SUV appearing to head toward a pedestrian but then diverting away from the pedestrian as the driver takes a sharp turn through empty parking spots.

The SUV then circles around the aisle and parks in close proximity to Daviscourt’s vehicle, while the conservative student seeks shelter by standing in-between parked cars.

Some time passes while Daviscourt remains standing in-between the parked cars, and the black SUV remains parked where it is. Daviscourt said that she had remained where she was, as continuing to walk toward her car would also mean walking toward the man’s car, who she said was staring her down the entire time.

Moments later, the video shows the SUV pulling out of the parking spot and heading down the aisle to pass Daviscourt once again, before appearing to fail to yield and hitting another vehicle. The driver then cuts off other vehicles and flees the scene.

Detective Patrick Michaud told Breitbart News on Saturday that no one is in custody but that police are pursuing the suspect, as they consider the matter to be a “hit and run,” as well as a “bias incident,” due to the suspect having “damaged and removed political posters” belonging to Daviscourt.

Turning Point USA President Charlie Kirk responded to the event on Twitter stating “Student gets stalked in parking lot and almost run over multiple times … Where is the media?”

What do these have in common?

Where is the media?

Donald Trump Jr. also weighed in. In a tweet that links to the Brietbart News article, he claimed: “This amazing young patriot was stalked and almost run over multiple times in a parking lot by a leftist. This needs to stop and media should report these hate incidents!!”

Another incident of attempted violence against a @TPUSA chapter leader. This amazing young patriot was stalked and almost run over multiple times in a parking lot by a leftist. This needs to stop and media should report these hate incidents!! https://t.co/tmkBkiXChY

Despite the traumatic experience and media coverage, Daviscourt stated she still intends to be active in campus politics.

“This young man needs to be held accountable and I anxiously await his arrest,” she tweeted in her statement. “I will not let this situation stop me from advocating my beliefs.”