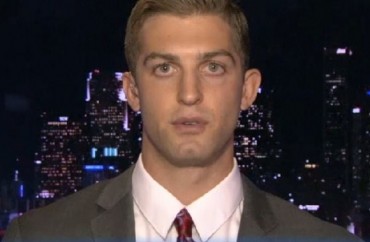 Steven Glick, editor-in-chief of the conservative-leaning student publication The Claremont Independent, has resigned from his campus job at Pomona College’s Writing Center, saying he’s been being continually harassed by its progressive staff to a point where he can no longer take it — despite his love for the job.

In a Feb. 28 piece posted on the Independent titled “I resign: The Writing Center’s mission is to teach writing, not ideology,” he states that while his aim was simply to help strengthen peers’ writing, its leaders had other goals.

What did Glick endure? For one, he notes he incurred the anger of the center’s team coordinator, who accused him of “being an obstacle preventing the Writing Center from being a ‘safe space.'”

“This came in response to a news article I had written that detailed a series of no-whites-allowed ‘safe spaces’ at the Claremont Colleges,” Glick explained.

In a subsequent meeting with another center professor, Glick said he was told he was not doing enough to make the center a space where students felt welcome.

“To rectify that, she canceled my appointments that night and asked me to read three packets about identity politics instead,” Glick writes. “One of the readings states that teaching English to non-native English speakers is an attack on free speech. Another criticizes ‘the hegemonic feminist theory produced by academic women, most of whom were white.’ The third, titled ‘Heteropatriarchy and the Three Pillars of White Supremacy,’ states that capitalism is racist.”

“I read all three packets, as I had been told to do. I did not agree with the opinions presented in any of them, nor did I see any connection between these readings and my work at the Writing Center,” Glick added.

But Glick was then asked “what role identity politics should play in the Writing Center’s mission,” and said his answer was to provide “students with a community of experienced readers and writers, offering free, one-on-one consultations at any stage of the writing process—from generating a thesis and structuring an argument to fine-tuning a draft.”

Wrong answer. The next day Glick was placed on probation, he said. In the end, he said he had to walk away from a job he loved.

This situation with Glick – a bright, driven and talented young man — may not come as a surprise to those following the The Claremont Colleges, a consortium of five undergraduate liberal arts colleges in Southern California.

Consider its track record in just this school year alone (everything below references an incident at the consortium since July 2015):

At Scripps and Pomona colleges, several events for students of color only have been hosted in what amounts to segregated “safe spaces.”

An Asian student at Claremont McKenna College was shamed and silenced for saying “black people can be racist” and asking her peers to look beyond skin color to see people’s hearts.

The student government at Pitzer College approved a tattoo club, but rejected a proposal for a “Yacht Club,” with campus leaders saying the term “yacht” is “offensive” and the sport too “exclusive.”

The mainstream campus newspaper created an unedited “safe space” for minority students and “people of color.”

Many of these stories came to light thanks to the intrepid reporting of Glick and the staff of the Claremont Independent, so it’s no wonder his faculty bosses at the Writing Center had an ax to grind.

The latest situation with Glick is just one example in a long string of examples showcasing just how far to the left the consortium lies. Indeed, it’s safe to say it just might be in the Twilight Zone.