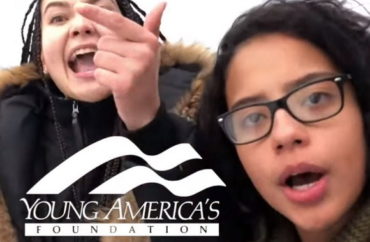 Attorneys have filed a federal lawsuit on behalf of Young America’s Foundation and College Republicans against the State University of New York at Binghamton administration and others involved in several incidents last fall that aggressively targeted and silenced conservative students on campus.

Last November, leftist protestors overwhelmed a small group of College Republicans who had set up a table to promote an upcoming event with Arthur Laffer, a world-renowned conservative economist known as the father of supply-side economics, hosted by Young America’s Foundation through its nationwide campus lecture program.

In a video of the incident, a crowd of student counter-protesters is seen yelling expletives, making threats and destroying the conservative students’ materials in a mob-like confrontation. Four days later, the guest lecture with Laffer was shut down by another group of rowdy and aggressive student protesters.

University officials did not respond to emails Tuesday and Wednesday from The College Fix seeking comment.

According to the lawsuit, SUNY-Binghamton officials conspired with leftist disruptors to deprive conservative students of their First and Fourteenth Amendment rights to free speech and equal protection in those two related incidents on campus last fall.

At the tabling melee, as the confrontation had intensified, five of SUNY-Binghamton’s campus police were called to the scene.

“The College Progressive mob confiscated and destroyed College Republicans’ Dr. Laffer Event flyers and posters, broke down and carried away their table, hurled insults and obscenities at their members who were tabling, and physically assaulted one member, forcibly removing her hat bearing the political slogan ‘Make America Great Again,’” the complaint states.

“Instead of dispersing the mob and protecting College Republicans’ right to free speech as the written regulations required,” the lawsuit states that the campus police “applied the Speech Suppression policy by demanding that College Republicans leave … while the College Progressives chanted ‘Pack it up.’”

Later, Vice President for Student Affairs Brian Rose actually blamed the College Republicans, accusing them of being “provocative” in an official statement on the matter, the suit points out.

Binghamton Police Chief John Pelletier is one of three individuals named as a defendant in the lawsuit. The others are Rose and Binghamton President Harvey Stenger.

After the crazed encounter, the lawsuit states “two members of College Republicans, including Jon Lizak, filed police reports … over the physical and verbal harassment they received from the College Progressives mob.”

“Stenger, Rose, and Pelletier not only failed to take action to defend College Republicans’ constitutional rights, but personally and actively supported thuggish and physically abusive actions of the College Progressives,” the lawsuit alleges.

Also named as defendants are College Progressives, a student group at SUNY-Binghamton, the Student Association of Binghamton University, and Progressive Leaders of Tomorrow, a non-student group.

After the tabling debacle, YAF had immediately sought to ensure that the Laffer event would proceed “despite the violent and abusive atmosphere that Stenger, Rose, Pelletier, and College Progressives created through their blatant violation of College Republicans’ constitutional rights,” the lawsuit states.

This included hiring a private security firm to provide personal security to Laffer and making multiple requests that campus police remove disruptors rather than Laffer.

However, according to the lawsuit, SUNY-Binghamton officials refused to make such assurances despite their knowledge of College Progressives’ and PLOT’s plan to disrupt the event. Campus leaders even facilitated their plan by providing protestors with a lecture hall right next to and with connecting doors to the Laffer event, the suit alleges.

It also claims two campus officers actually met Laffer when he arrived at the airport to convey “SUNY-Binghamton’s desire that [he] return to his plane and cancel the event.”

“UPD’s message was clear: pursuant to the Speech Suppression Policy, UPD did not intend to protect Plaintiffs’ constitutional rights by securing the event but instead wanted to prevent Dr. Laffer from speaking at all,” the lawsuit states.

Moments after Laffer took the podium to give his scheduled Nov. 18 extracurricular lecture, titled “Trump, Tariffs, and Trade Wars,” one of the many protestors packed into the room immediately started to shout accusations at him.

“We are tired of being oppressed and we are tired of getting murdered by this [Trump] Administration… [t]hat you, this man, this liar, Arthur Laffer, supports,” the leftist agitator began.

According to the lawsuit, campus police, although stationed in the room, only stood by as the disruptor was given a megaphone, allowing him to speak for almost two minutes before they moved to restrain him.

Shortly after, Laffer was removed from the lecture hall at the order of the campus police.

“Instead, they encouraged the mob and stood by as megaphone-wielding activists shut down the event. These students and their guests have the same right to speak as anyone else without fear of being physically assaulted or relentlessly antagonized by hostile disruptors. This blatant viewpoint discrimination cannot stand.”

According to the lawsuit, the university made no attempt afterward to punish the leftist agitators who disrupted the event, but instead, punished its conservative students by suspending the College Republicans.

The student government sent the College Republicans a two-line email informing them that they were being “suspended . . . due to [their] violation with both University and Student Association policy [sic] in regards to tabling without proper approval on Thursday November 14th.”

But campus leaders and the student government have not required other groups to obtain approval before tabling on campus, the lawsuit contends.

“This punishment was an unconstitutional enforcement of the University’s tabling policy because it was motivated not by College Republicans’ decision not to obtain a permit, but by Stenger, Rose, and the Student Association’s disagreement with College Republicans’ and YAF’s views,” the lawsuit states.

YAF to Sue SUNY-Binghamton and Leftist Campus Groups Over Anti-Conservative Bias And Disruptions — via @LegInsurrection https://t.co/dkLwFwUEKq

“Public universities that pick and choose which voices can be heard on campus violate the First Amendment,” he said. “Universities have an obligation to protect students’ free speech rights, regardless of their viewpoint. University officials that let loose a mob to suppress disfavored speech are as guilty as the mob itself of depriving students of their civil rights. SUNY students deserve better.”

Young America’s Foundation spokesman Spencer Brown also stated that “SUNY-Binghamton has a legal obligation to protect and defend the God-given and constitutionally-protected rights of its students. YAF is eager to remedy the disparate, shameful treatment of conservative students at SUNY-Binghamton with decisive action.”