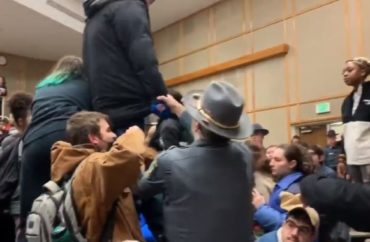 Rowdy and aggressive activists shut down a speech Monday night at the State University of New York at Binghamton by the famed “father of supply-side economics” Arthur Laffer, who was awarded the Presidential Medal of Freedom in June.

The speaker goes on to call incarcerations “the modern day slavery of our time” as a fellow activist hands him a bright spotlight that he shines toward the front of the room, apparently where Dr. Laffer is standing. As supporters of the economist move to block the light, many in the crowd erupt with laughter.

Videos show that as a police officer moves toward the speaker with the microphone leading the verbal disruption, others — likely students, some wearing red armbands — move in front of him like some sort of human shield to impede the officer. As the officer moves closer, protesters begin to chant “free speech, free speech.”

I’m disgusted by the chaos we’ve witnessed erupt across the @binghamtonu campus over the past several days. Our college campuses should be places where ideas and peaceful discourse can be shared freely by all individuals, no matter their differing politics or opinions. pic.twitter.com/75QENYMlRv

Brian Rose, Binghamton’s vice president for student affairs, released a statement late Monday that spelled out how officials had tried to stop problems from taking place, as administration was aware tensions were running high over the guest lecture.

“The university moved the event to a larger lecture hall due to safety concerns. Demonstrators were provided the opportunity to hold their own speak-out in an adjacent lecture hall. The university deployed a large number of police to maintain order at the event. Attendees at the lecture were asked to allow the presentation to go forward and reserve their questions until the end,” Rose said.

“Despite those measures, the lecture was immediately disrupted and the speaker was entirely prevented from addressing the audience led by an individual using a bull horn. That individual was arrested, as was another individual who attempted to interfere with police.”

“The university is incredibly disappointed with the events that happened tonight, particularly given that demonstrators were provided an adjacent lecture hall to engage in a counter discussion. The protestors chose instead to infringe on the expressive activity of others and to prevent those who wished to hear the speaker from doing so.”

New York State Sen. Fred Akshar, a Republican, was in attendance and filmed part of the incident and posted it on his Twitter account. He published a statement Monday night stating he was “disgusted,” noting the protest began right as Laffer began to speak and that the famed economist had to be escorted out by police for his own protection.

“These kind of unconstructive and abusive stunts should have no place on the campus of an institute for higher learning,” Akshar stated.

Young America’s Foundation, which co-hosted the guest lecture along with the College Republicans, stated on Monday the group may file litigation against Binghamton University over the incident.

“Instead of removing the disruptors, the university chose to escort Laffer out of his own lecture,” the foundation stated. “The university’s use of a heckler’s veto violates the students’ constitutional rights.”

Monday’s incident was the latest campus controversy to strike in less than a week at Binghamton University.

On Thursday, a massive and rowdy group of students surrounded and harassed their conservative peers with Turning Point USA and the College Republicans who were tabling on campus. They trashed their displays, threatened them, got in their faces and more. The aggression on the part of the mob was so virulent that five campus police officers were called to the scene and eventually the conservative students were escorted away.

Yet Vice President for Student Affairs Brian Rose released a statement earlier on Monday that stated the College Republicans and Turning Point USA did not have official permission to table that day, that they twice refused to leave, and that their messaging and actions were “provocative.”

“Self-evidently from the nature of their display and their refusal to comply with procedures for reserving the space in question, the groups intended to be provocative,” Rose stated.

With that, the College Republicans may face some sort of consequences, Rose stated.

“Had the group followed procedures, the University would have had the opportunity to plan for what was self-evidently a provocative presentation in a manner that may have facilitated expressive activity by both the tabling groups and those who wished to demonstrate against them. Any future action taken against the College Republicans will pertain to their violation of University and SA policies and procedures and not to the content of their message,” Rose stated.

He added the protesters from Thursday’s incident will not face disciplinary measures: “There were also protesters who acted in a manner that may have violated University rules. In the context of the incident and in keeping with the principles and values noted above, the University did not seek to identify or charge any protesters.”

Binghamton College Republicans President John Restuccia posted on Facebook a statement from the group that accuses Rose of being disingenuous, saying Turning Point USA and the College Republicans — as well as “countless” other organizations — have tabled in the past on campus without permit or problem.

As for Monday night’s disruption, it was well planned, with student activists distributing materials on social media calling for the action. Their materials called Laffer a “liar whose theories have been used to justify tax cuts for the rich and raised on marginalized entities.”

When President Trump awarded Laffer the Presidential Medal of Freedom in June, he noted that the economist has “helped inspire, guide, and implement extraordinary economic reforms that recognize the power of human freedom and ingenuity to grow our economy and lift families out of poverty and into a really bright future.”

“Today, our nation is stronger, our people more prosperous, and the world a much better place because of the brilliance and boldness of Dr. Arthur Laffer.”