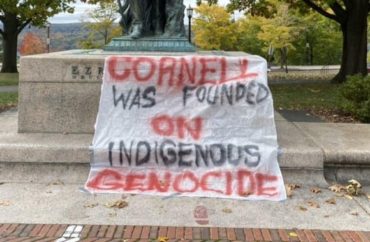 Native American students at Cornell University recently accused the school of “profiting from acts of colonial violence” and demanded the Ivy League university take steps to atone for its past actions.

The Native American and Indigenous Students issued its petition on October 12, Columbus Day, and stated that the university is “founded on Indigenous dispossession and genocide.”

“To this day, the University upholds a tradition of profiting from acts of colonial violence and Indigenous erasure,” the group said.

For the university to “rectify these crimes,” the students want Cornell to meet 10 different demands.

The university’s media relations office did not respond to multiple requests for email from The College Fix in the past week on the demands and accusations.

The demands include converting the American Indian and Indigenous Program into a full academic department in four years. The program currently offers courses and a minor, but does not offer a full major.

The students demand “increased funding” to the Indigenous Program “for the recruitment and retention of new Indigenous faculty members, to support the transition of the program to department status.”

The group also wants the university to hire a new staff member to recruit Native American students so the school can increase its enrollment from .3 percent of the student population to 1.7 percent.

“The University shall make efforts to increase the number of enrolled Hawaiian/Pacific Islander students to 1.0% of the total student population,” the group also demanded.

“Any student coming from a community affected and/or displaced by the Morrill Land Grant Act shall receive a free education, regardless of field of study,” the students also demanded. The Morrill Act is an 1862 law that set aside land for the establishment of public colleges for the promotion of agricultural and technical training.

The group wants to see the university rename Morrill Hall, named for Justin Morrill, the sponsor of the law.

NAISC did not respond to multiple emailed requests for comment and a Facebook message seeking information on if the university had responded to its demands as well as how it would determine what communities were displaced by the Morrill Act.

The group demands a “land acknowledgement” before all university events, and returning all lands not currently in use back to indigenous peoples in the area.

“The University shall return all lands in the Ithaca area not immediately utilized for educational purposes to the traditional Gayogo̱hó꞉nǫʼ leadership,” the student wrote.

The students also want a mandated course on “Indigenous Studies” to “ensure that all students have a basic understanding of the gravity of Indigenous genocide and their own positionality on stolen Indigenous land.”

It wants Cornell to hire an “Indigenous therapist” who can “aid in addressing the unique mental health struggles affecting Indigenous students, staff, and faculty.”

The group has previously protested the school for its ties to the fossil fuel industry. The students accused the school of perpetrating violence against Native American women.

The university’s investment in oil and gas companies make them “complicit in the trauma of murdered and missing indigenous women” the students said.