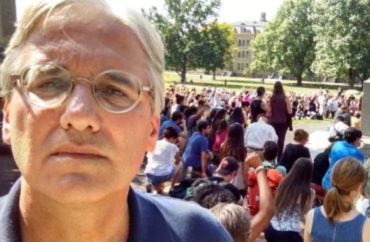 An email campaign earlier this month lobbying to get Jacobson fired did not meet its goal, however the scholar has essentially been labeled a racist by many peers and others in the Cornell community.

More recently the Black Law Students Association at Cornell issued a call to boycott his courses, according to Jacobson, the only openly political conservative law professor at the Ivy League institution.

“Earlier this week, the Black Law Students Association circulated an email statement to the Cornell Law School community repeating many of the false and misleading accusations against me that I have covered in earlier posts,” Jacobson wrote Wednesday on his conservative blog Legal Insurrection.

“But it went beyond that. They refused my offer to debate their representative and a faculty member of their choice, issued a call to boycott my course, and demand the law school screen faculty hires for ideological purity.”

The campaign against the legal scholar comes after two posts on Legal Insurrection that criticized the Black Lives Matter movement.

One is headlined “The bloodletting and wilding is part of an agenda to tear down the country,” and it was posted June 3. The other is titled “Reminder: ‘Hands up, don’t shoot’ is a fabricated narrative from the Michael Brown case,” and was published June 4.

One of Jacobson’s controversial posts argued that the Black Lives Matter organization misled its followers as to the events leading up to the death of Michael Brown, a black man who was killed by a police officer in 2014.

In an interview with The College Fix, Jacobson defended this view, saying the “narrative created by BLM and others was that Michael Brown was shot with his hands raised up in surrender.”

“But it’s a fabricated narrative,” he said. “After an exhaustive investigation, the Obama Justice Department found that Michael Brown’s hands were not raised and he did not say ‘don’t shoot.’ … The entire founding narrative of BLM is false.”

The second controversial post used the word “wilding,” a racially charged term, to describe the nationwide protests and riots following the death of George Floyd by a white police officer.

“The Black Lives Matter movement, founded based on fraudulent narratives of the Trayvon Martin and Michael Brown cases, is led by anti-American, anti-capitalist activists,” Jacobson argued in the post. “They have concocted a false narrative of mass murder of Blacks at the hands of police, when the statistics show otherwise. They will exploit George Floyd’s death mercilessly to drive that agenda.”

In response, a June 9 letter to the editor published by the Cornell Daily Sun student newspaper and signed by more than 20 Cornell Law faculty denounced his writings and accused Jacobson of creating a “smear campaign against Black Lives Matter.”

“These commentators are the defenders of institutionalized racism and violence,” the letter reads. “We do not name them, so as to deprive them of a larger platform for their racist speech.”

While the letter never mentioned his name or blog, Jacobson said he knew exactly who its intended target was, telling The College Fix “it clearly was directed at me, and was shared with students before publication, who understood it to be a condemnation of me.”

“None had the common decency to approach me with any concerns,” Jacobson wrote in Legal Insurrection. “Instead they ran to the Cornell Sun.”

Next, a flurry of emails from alumni and students alike demanded that the law school dean reprimand Jacobson. According to the professor, many of the emails called for his firing.

Eduardo Peñalver, dean of Cornell Law School, then published a statement shortly after that censured Jacobson, calling his posts “offensive” and “poorly reasoned.”

But, the dean defended Jacobson’s right to free speech.

“We can simultaneously affirm our commitment to diversity and inclusion and equal justice while employing someone who has written the sorts of things about the protests that Professor Jacobson has, because, as an institution of higher learning, we also value academic freedom, which prevents us from censoring the extramural writings of faculty members. And we value job security for our clinical faculty,” the dean stated. “ … Our unwavering commitment to these values means that all Cornell Law professors must be able to write and speak freely.”

When asked his view on the community’s response to his posts, Professor Jacobson explained there are two sides to every coin.

“A variety of views on BLM from faculty and students should be permitted and encouraged [at Cornell]. There should not be just one institutionally acceptable point of view,” he told The Fix.

On his blog, Jacobson wrote the experience indicates “extraordinarily dangerous times, reminiscent of the Chinese Communist Cultural Revolution, in which professors guilty of wrongthink were [publicly] denounced and fired at the behest of students who insisted on absolute ideological orthodoxy.”

“It’s a way of instilling terror in other students, faculty, staff, and society, so that others shut up and don’t voice dissenting views. We are seeing monuments destroyed in Taliban-fashion because they represent an uncomfortable history, movies and TV shows cancelled, and individuals disappeared from employment due to even the slightest deviation from the prevailing political culture.”

Jacobson did not stand alone, however.

George Washington University Law School Professor Jonathan Turley was quick to note the threatening nature of Cornell’s response to the posts: “There is an enforced orthodoxy that is captured in the Cornell letter.”

“These letters are successful in creating a chilling effect on academics who are intimidated by these threats. To be labelled as a racist is devastating to an academic career and these professors know that. Now, even ‘informed commentary’ will be denounced as racist if a professor raises a dissenting view.”

The academic integrity organization Scholars for Peace in the Middle East also commented on the ordeal.

“What is happening at Cornell is part of a much larger pattern. On campuses in particular we see ongoing pressure for conformity in the name of outrage which plays a decisive role,” reads their statement of solidarity with Jacobson.

Asked if he regretted posting his opinions to Legal Insurrection, Jacobson had but one word in reply to The College Fix — “No.”