A Cornell senior who took an introductory oceanography course last year credits the class and its professor for transforming him into a vegan … and climate activist.

Government major Benjamin Finegan was one of the many demonstrators who occupied Nancy Pelosi’s Capitol Hill office on November 13 and greeted by “Green New Deal” proponent Alexandria Ocasio-Cortez. He also was one of those arrested for his actions.

The influence of the course was of such magnitude that Finegan is now is taking a hiatus from the university to pursue more activism.

According to The Cornell Daily Sun, Professor Bruce Monger’s Introduction to Oceanography enrolls over 1,000 students every fall semester. Monger’s Rate My Professors ratings are overwhelmingly positive, featuring comments such as “Literally the best teacher ever” and “an amazing passionate professor.” 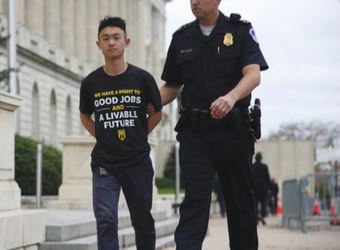 However, there are also remarks such as “[He] is passionate about climate change and wants people to make an impact outside of class” and “[he] transforms the class into an unsettling yet awing awareness of the greatest threat to HUMANITY: climate change” (emphasis added).

In Finegan’s case, Monger’s class was “instrumental in changing [his] sense of agency and responsibility for this [climate change] crisis.”

“Professor Monger’s Oceanography class helped me to see that the Climate Crisis [sic] is one of the defining human rights issues of our time,” Finegan said. “Learning the science of climate change and its ecological effects made it clear how urgent this problem is, and that the answer is not lifestyle changes or new technology.

Monger praised Finegan when he heard about his arrest in Washington, noting his reaction “was one of great admiration for the former student and a deep sense of satisfaction for [himself] and the work [he does] in the oceanography class.”

“A central theme of the oceanography class asks that students not be passive with regard to environmental issues and to raise their voices, especially with regard to climate change,” Monger said. “This former student clearly heard that important message.”

The final assignment for students in Introduction to Oceanography is to write a letter to their government leaders, requesting that the government address issues of climate change and other environmental impacts. Students are required to write the letter, but actually sending out the letter is optional. According to Monger, the point of the assignment is to show students how “they can raise their voice for climate action using the scientific concepts presented in the class.”

Monger said that he became an oceanographer because he liked science, liked the ocean and wanted to travel the world, but that his current interested in teaching oceanography at Cornell is “driven by [his] evangelical fervor to inform and inspire all Cornell Students to act on climate change.”

He said that to reduce the effects of climate change, students should vote, be vocal and advocate for change to help spark a social movement, and take individual actions such as eating less meat, flying less, and taking less public transportation.

MORE: Scrap democracy to save the planet from climate change