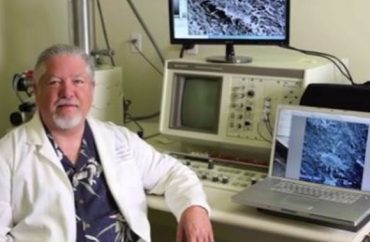 A creationist scholar recently received a six-figure settlement from California State University Northridge, a payout that resolved a 2-year-old lawsuit that alleged the scholar had been fired after discovering soft tissue on a triceratops horn and publishing his findings.

The plaintiff, Mark Armitage, had alleged religious discrimination and a violation of the Fair Employment and Housing Act in his suit, claiming in court documents that after his discovery – which supports a young Earth theory – some professors went on a successful “witchhunt” against him.

Armitage’s attorney, Alan Reinach, called the settlement “groundbreaking,” noting that in his decades practicing law he is unaware of any other favorable settlement of this nature on behalf of a creationist.

‘We are not going to tolerate your religion in this department!’

Armitage, who has some 30 publications to his credit and is past-president of the Southern California Society for Microscopy, was hired by the university in early 2010 to manage a wide variety of oversight duties for the biology department’s array of state-of-the-art microscopes, court documents state. He also trained students on how to use the complicated equipment. In the summer of 2012, while at the world-famous dinosaur dig at Hell Creek Formation in Montana, Armitage discovered the largest triceratops horn ever unearthed at the site — complete with soft fiber and bone tissues that were stretchy.

He published his findings, first in the November 2012 issue of American Laboratory magazine, which published images of the soft tissue on its cover, and then online in February 2013 in the peer-reviewed journal Acta Histochemica, according to court documents.

The lawsuit contends that’s why Armitage’s employment at Cal State Northridge was terminated, with one professor allegedly storming into his office and shouting: “We are not going to tolerate your religion in this department!”

Campus officials told Armitage his job was only a “temporary appointment,” and claimed a lack of funding for his position.

“When it became published and the university was associated with this,” Reinach said, referring to Armitage’s article reporting on the soft tissue, “that was intolerable.”

“To have CSUN associated with the creation heresy — that was the capital offense,” Reinach said, noting Armitage was fired a few weeks after the article was published.

He said the article had not gone into the implications of the discovery, only stated the findings. Reinach added the scholarly editors stood behind the publication of Armitage’s work. But it was still enough to rile up some professors at CSUN.

Reinach is executive director of the Church State Council, a nonprofit California-based public interest legal organization dealing with religious freedom issues with a focus on religious discrimination and employment.

In a telephone interview Monday with The College Fix, Reinach declined to state the exact amount of Armitage’s settlement, only that it was a six-figure dollar amount, “a substantial settlement representing about 15 times his annual part-time salary.”

The university maintains Armitage was let go due to budgetary reasons, and that the public, Los Angeles-based university settled the case to avoid a costly, protracted legal battle.

As for the settlement, she stated: “The Superior Court did not rule on the merits of Mr. Armitage’s complaint, and this voluntary settlement is not an indication of any wrongdoing. The decision to not renew Mr. Armitage’s contract was based on budgetary considerations and a dwindling need for his services. The decision to settle was based on a desire to avoid the costs involved in a protracted legal battle, including manpower, time and state dollars.”

In response, Reinach said “technically they are right, the judge did not rule, in the settlement agreement there is no admission of guilt, and they have rehashed their claim that he was fired for budgetary reasons.” But the attorney added that “in our view, they certainly would not have paid that kind of money if they did not recognize that we had them dead to rights. The state doesn’t put large, six-figure settlement money out unless they are really concerned they are going to lose.”

“The evidence was quite clear,” the attorney continued. “The stated reasons for saying they fired him were simply not true. There were lies and contradictions abounding from several of the key witnesses.”

One of the “smoking guns” was an email between campus officials suggesting they could ease Armitage out gracefully by making his part-time position full-time, Reinach said.

“Not only did it not support the notion that there was budgetary concerns, but in fact suggested to the contrary,” he told The Fix.

Reinach also pointed out that the settlement agreement was forged soon after Los Angeles Superior Court Judge Dalila Lyons issued in July a tentative ruling against the university’s request for summary judgment.

In an email to The College Fix, Armitage referred to a YouTube video he created about the settlement, which he called “vindication.”

He added he has been on two additional digs in Montana in recent years and “have found soft tissues at both of them.We are trying to get our papers published now. … I’m clearly being blackballed and that’s why I don’t want to give out too much information about our finds or the dinosaurs that we found them in.”