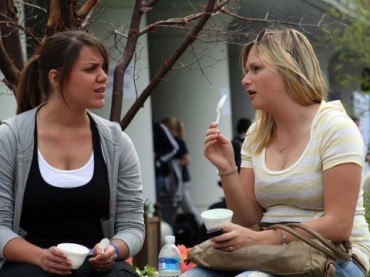 A mysterious email that appeared in Dartmouth College students’ inboxes Monday that claimed the Ivy League institution is racist and sexist and demanded a series of reparations under the threat of “physical action” was met with mixed emotions from students Tuesday.

Some Dartmouth students simply laughed. Others shrugged, saying they had deleted it immediately. A few became visibly upset and were too flustered to express specific concerns. A handful said they agreed with some points, but disliked the aggressive attitude of the message. Several students representing a variety of ethnic backgrounds said they disagreed with the email’s call for affirmative action and its claims the campus is racist.

Ultimately, the majority of students were not surprised by the email. To them, they said in interviews with The College Fix, the list of demands sent to all Dartmouth students, staff, and faculty by a group calling themselves “the Dartmouth Freedom Budget” was an unfortunate but all-too-typical occurrence.

The email contained 8-pages worth of varying demands, including: the creation of new ethnic studies departments; the widespread use of affirmative action and racial enrollment quotas; and the recruitment of and financial support for illegal immigrants, which the manifesto insisted must be called “undocumented.”

Other demands included gender-neutral bathrooms in every building on campus, new queer and sexuality studies classes, and the creation of a policy to penalize and discriminate against students who use the Indian mascot.

The letter went on to outline further measures and even carried veiled threats if its demands were not met, saying “physical action” would be taken.

As of Tuesday, the email’s origins remained unclear, as it was not signed by individuals or specific groups but rather “concerned Asian, Black, [email protected], Native, Undocumented, Queer, and Differently-Abled students.” A meeting is scheduled for today by the group to answer questions about their proposal.

Some students said they believe it likely came from one of two informal groups known to stage radical protests at Dartmouth. For example, last spring, some student radicals’ protests claiming the campus was oppressive and racist prompted administrators to cancel class for a day of dialogue.

Administrators did not respond to a request for comment about the “Freedom Budget” by The College Fix.

As for whether these demands resonated with students at the rural New England Ivy, including those whose ethnicities were singled out, not everybody agrees the campus is in such dire straits.

Brian Chen, a freshman of Chinese background, said that “I think that these people are completely out of touch with reality.”

He stressed the financial burden the changes would create and asked what purpose such cultural pandering would accomplish. When asked if he felt discriminated against on campus, he answered: “Only for my political ideas.”

A freshman woman wishing to remain anonymous argued that while the demands were “pretentious” and too numerous, “the problems are real.”

One proposal included in the document was that the penalty for a student found guilty of rape be expulsion. This measure seemed to inspire universal support among students, but the same woman said that including such things as the creation of seemingly random new departments next to this popular demand was an insult to its importance.

Students of all ethnic backgrounds seemed to disagree with the email’s call for affirmative action.

“It is important to have diversity, but it is also important to get the best students possible, regardless of color…. [The proposal] is intrinsically racist,” freshman David White told The Fix.

A freshman of African descent who wished to remain anonymous even said that she found the suggestions of the document insulting. When asked about affirmative action based on race, she said: “I don’t think that’s a good idea because it encourages complacency.”

She said that while she thinks it is important to have a broad range of people and to give underprivileged students a chance at success, she feels that many of her peers have been told that they do not need to work hard to get into college simply because of the color of their skin.

Her view, as well as the view of most students interviewed, was that financially based affirmative action made the most logical sense. When asked about whether she felt excluded by the school’s culture, she replied that she did feel that she was not in line with the general demographics of the student body, but that she never felt targeted or unwelcome.