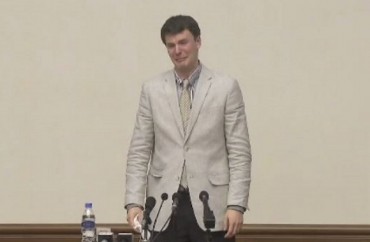 They complain because their homework is getting in the way of their activism. They freak out because a speaker they disagree with steps foot on their campus. They cry that they “can’t breathe” because of some nebulous “institutionalized racism.” With the support and tutelage of their professors, they decry their campuses — and indeed the entire United States of America — as oppressive.

Well, I have a message for these special snowflakes. Do you want to know what REAL oppression looks like? How about 15 years hard labor for attempting to steal a poster? How about being imprisoned in a jail where you’re so hungry that eating corn out of cow dung or, if you’re really lucky – catching a mouse – is considered a meal. How about being served “justice” by a court not ruled by a jury of your peers but rather a totalitarian government that cares less than nothing for your tears?

Enter the world of 21-year-old University of Virginia student Otto Warmbier, who was just sentenced to 15 years of hard labor for trying to nick a political banner from a hotel in Pyongyang, capital of the North Korea communist regime.

RELATED: Hey American feminists: This is what ‘rape culture’ really looks like

Writing on Intellectual Takeout, Devin Foley pretty much perfectly sums up the lesson in all this for today’s self-righteous, misguided, narcissistic college student:

North Korea and other despotic states are not playing around. While enormous leniency is given to college students here in the West, elsewhere that is not the case. Indeed, the history of the 20th century is littered with the carcasses of millions upon millions of people who were perceived as undesirable or a threat to the state in countries such as Russia, Mexico, Cuba, China, Cambodia, Germany, Italy, North Korea, Turkey, Rwanda, Somalia, Democratic Republic of Congo, Iraq, Syria, Burma, Sudan, Serbia, etc.

Perhaps due to modern entertainment and communications and the general state of our society, American youth seem to think that most of the world is just like us or that America is totalitarian while the rest of the world is progressing. That is simply not the case.

The values and principles that have shaped the West over thousands of years and, in many ways, culminated in America are largely unique to us. While the rest of the world mimics some of our laws due to the global order created by the West in the 20th century, they do not share our fundamental traditions or beliefs regarding human dignity and the individual. Sadly, there are many areas of the world where those in power would sooner put a bullet in your head or imprison you than tolerate any divergence from the order they have established through brute force.

He then goes on to cite an account from a U.N. ambassador who relayed the story of former North Korean prisoner Kim Young-soon, who recounted hunger so strong she and her fellow inmates would pick out kernels of corn from cow dung for food, adding “If there was a day that we were able to have mouse, that was a special diet for us.”

That is oppression. These are the people who have a right to say they “can’t breathe.” The residents of North Korea. The prisoners of North Korea. And now, American college student Otto Warmbier, who would probably give his pinky finger to be at any one of these alleged “oppressive” college campuses rather than where he is about to spend the next 15 years.