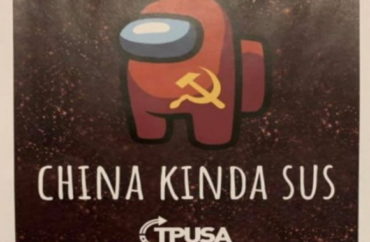 After a pair of Democrats met with school officials, the sponsor quit and the group had to disband

A pair of Illinois Democrats have succeeded in silencing and canceling a high school Turning Point USA chapter after the group hung up a poster that criticized the Chinese Communist Party.

“Upon learning of the context of the poster that Glenbrook South’s chapter of Turning Point USA submitted it was taken down, recognizing that it wasn’t in compliance with our policies and guidelines,” District 225 administrators told The College Fix via email through a media representative when asked about the Glenbrook South High School situation.

“During the course of that investigation, the sponsor elected to discontinue his sponsorship and the District’s policies require there be a sponsor for all active clubs,” the school officials said.

When asked specifically what policies or guidelines were broken, the district said it took down the poster while there was an investigation and then the sponsor quit, meaning the group had to be disbanded. 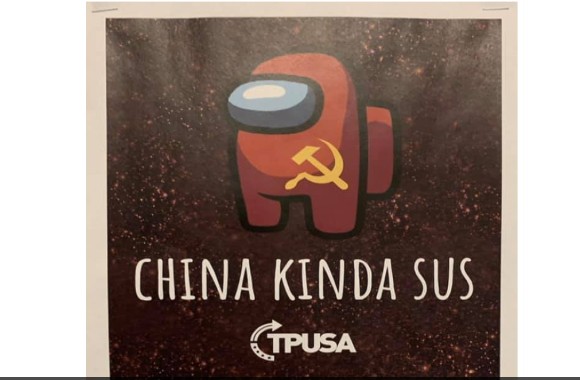 “The poster was taken down pending an investigation,” the officials said. “During the course of that investigation, the sponsor elected to discontinue his sponsorship and the District’s policies require there be a sponsor for all active clubs. Only clubs that are active are able to post materials within the school.”

MORE: District 225 student kills himself due to COVID restriction effects

The poster included a photo from a popular online game called “Among Us,” where players try to guess who the enemy is. The poster said “China is kinda sus,” meaning suspicious or suspect, and included a cartoonish character in red with the Communist hammer and sickle on it.

The pair had met with Charles Johns, the district superintendent over the poster. Johns did not respond to an emailed request for comment on May 17 that asked what policies the TPUSA group broke.

“The clear intent was to stoke xenophobic anti-Asian (sentiment),” Gong-Gershowitz, a parent of a Glenbrook South student, told Journal and Topics.

Andrew Kolvet, a spokesman for TPUSA, told The College Fix over email that the poster is not discriminatory towards Chinese people, but is instead against the Chinese Communist Regime. Kolvet explained that the use of the character from Among Us is tied to how the game works.

Similar to how the “impostor” in Among Us tries to sabotage the other players, Kolvet states that the poster shows that China is trying to sabotage America.

“Communist China, just like Communist Cuba and the former Soviet Union before it, commits atrocious human rights abuses including ethnic cleansing and forced sterilizations of their own people, and is generally attempting to sabotage American interests however they can,” Kolvet said.

“And just like the term ‘sus’ is used in the game, identifying China as our greatest geopolitical foe is not bigoted or racist—in fact it has nothing to do with race—it’s basic international affairs,” he said.

However, the Democratic politicians saw racism where the TPUSA group saw a political statement against oppression.

“We expressed our conviction that this racist, harmful sort of content must not be permitted,” a letter from Fine and Gong-Gershowitz said, summarizing the April 30 meeting with Johns. “At a time when anti-Asian racism and hate crimes are being committed at a disturbing frequency, we must come together as a community in support of the values outlined in Glenbrook South’s mission statement.”

Gong-Gershowitz told Journal and Topics that the anti-Asian incidents happened in Glenview, where the school is located, but were not reported to the police.

“We have been the victims of radicalized violence and exclusion throughout Asian American history,” she said, after passage of her legislation to mandate the teaching of Asian-American history in public schools.

Neither politician would respond to questions from The College Fix about if any criminal or hateful incidents had been tied to the poster and what specific policies the free-market student group broke by posting the poster, approved by school officials.

Benjamin Head, a media relations manager for Gong-Gershowitz, did not respond to two emailed requests for comment sent in the past two weeks. Her Facebook page also did not respond to a message seeking more information on the hate incidents against Asians.

Eliza Glezer responded on May 17 to a media request for comment for Senator Fine and said she could answer questions. However, she did not respond to a follow-up email asking for comments to Fix questions.