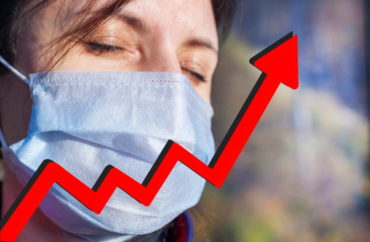 ANALYSIS: If the goal is to prevent infection, the 95 percent vaccination rate on Cornell’s campus has not accomplished that

Cornell University has aggressively pushed its students to get vaccinated, announcing a vaccine mandate for the 2021-22 academic year in April and frequently denying religious and medical exemptions.

As a result, 95 percent of the campus population, both students and faculty, is vaccinated.

By the numbers, during the first week of school that ran from Aug. 27 to Sept. 2 of this academic year, Cornell reported 322 positive COVID-19 cases.

In comparison, during the first week of school last year, which ran from Sept. 3 through Sept. 9 of 2020, Cornell reported 59 positive COVID-19 cases.

That is 263 more cases, or more than five times the amount of positive cases, when comparing the first week of school.

Most students attended in-person classes in the fall of 2020 and were required to wear masks, just like this academic year. The increase in positive cases cannot be attributed to an increase in testing — in fact, more tests were administered in the first week last fall, according to the Cornell COVID dashboard. 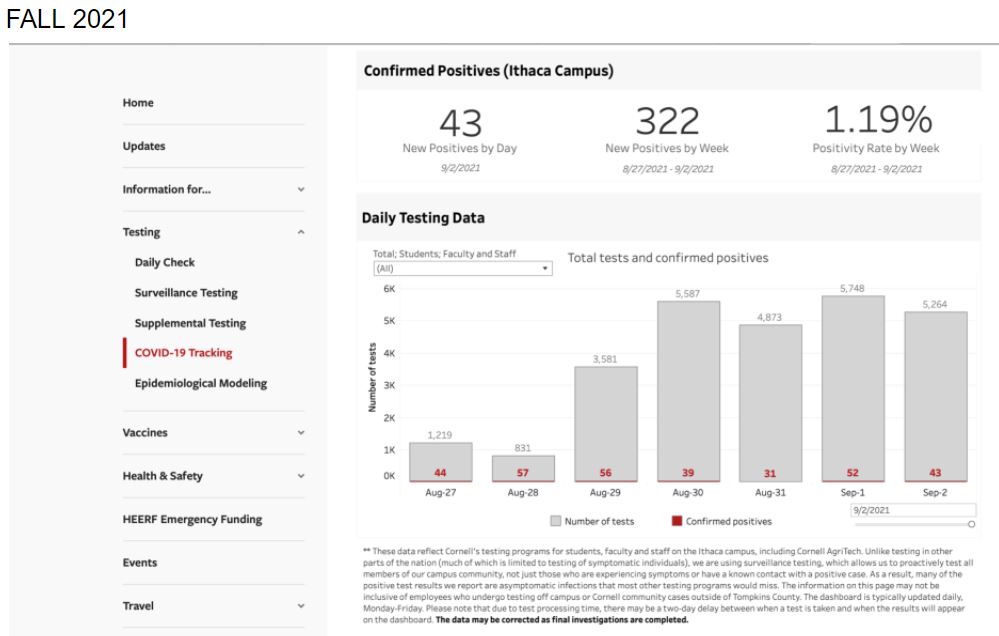 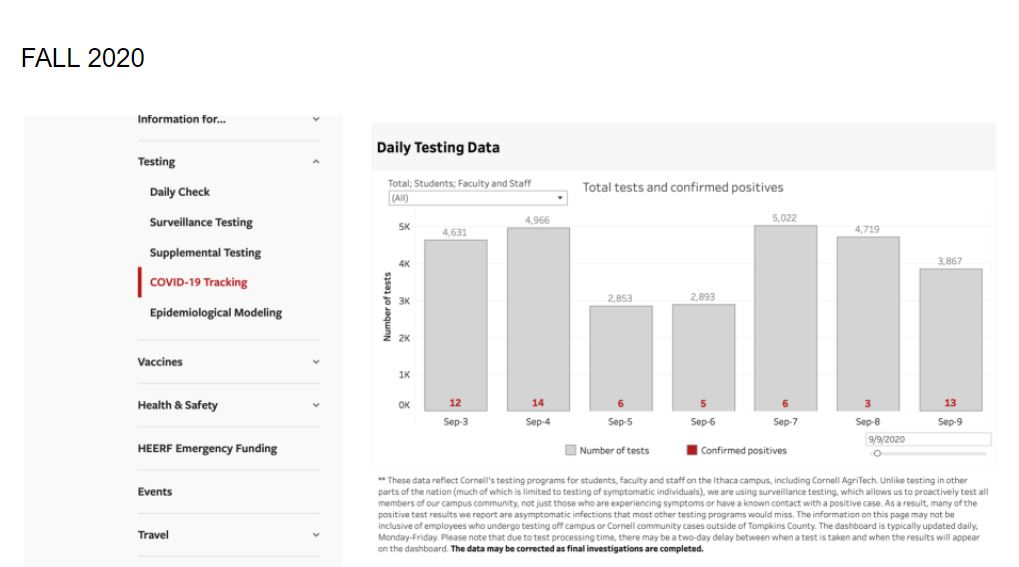 From Sept. 3 through Sept. 9 of 2020, there were 28,951 COVID tests administered, according to the Cornell COVID dashboard. There were only 59 positive tests, or a 0.2 percent positivity rate.

No variable changed: Cornell announced in July that it would still require all individuals, regardless of vaccination status, to wear a mask while inside. The same public health measures, often criticized as too strict, that were in place last year remain in place this year.

Due to the high amount of positive cases the Ithaca campus is currently experiencing, President Martha Pollack warned classes may be moved online if the trend continues. Meanwhile, the campus has been moved to a “Code Yellow.”

If the goal is to prevent infection, the 95 percent COVID-19 vaccination rate on Cornell’s campus has not accomplished that.

As Cornell and many other universities across the country mandate these vaccines, one must ask: to what extent are the vaccines effective? Do the benefits of vaccination outweigh the risks for healthy 20-year-olds?

The risk of an adverse reaction to the COVID-19 vaccine, while minute, is not zero.

According to CDC and FDA data, the mRNA vaccines have been linked to increased risk of myocarditis, a serious heart condition, in young people, particularly young men. While this reaction to the vaccine is exceedingly rare, the connection between the mRNA vaccines and myocarditis is higher than previously thought.

Further, Dr. Robert Malone, one of the founders of mRNA vaccines, warned on evolutionary biologist Bret Weinstein’s podcast that the spike protein received from vaccination is, in his medical opinion, cytotoxic.

And according to information released by the Japanese government in response to a Freedom of Information Act request, the lipid particles from the Pfizer vaccine concentrate overwhelmingly in the ovaries and also bone marrow.

Why on earth would Cornell force its students to receive this vaccine?

To be clear, Americans who are elderly, immunocompromised, or suffer from a serious underlying condition should definitely get the vaccine. But even in those cases, they must still have the freedom to make such a decision for themselves.

Cornell’s draconian COVID-19 policies have failed, and now the administration’s promises about a normal, mask-free academic year in return for achieving “herd immunity” have come crashing down against the cold reality we all face.

If the vaccines cannot prevent infection and return us to normalcy, what then, is the point of returning to campus at all?

Editor’s note: The author of this piece has requested and been denied a religious exemption from Cornell’s vaccine mandate. He received the first dose of the Moderna vaccine in June.