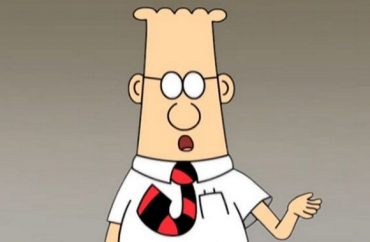 Scott Adams, the creative genius behind the popular comic “Dilbert,” is no longer a fan of his alma mater: UC Berkeley.

“I’m ending my financial and other support for #UCBerkeley (for my safety),” Adams announced on Twitter on Friday.

Elaborating on his decision-making process, Adams explained on his blog:

… I’m ending my support of UC Berkeley, where I got my MBA years ago. I have been a big supporter lately, with both my time and money, but that ends today. I wish them well, but I wouldn’t feel safe or welcome on the campus. A Berkeley professor made that clear to me recently. He seems smart, so I’ll take his word for it.

I’ve decided to side with the Jewish gay immigrant who has an African-American boyfriend, not the hypnotized zombie-boys in black masks who were clubbing people who hold different points of view. I feel that’s reasonable, but I know many will disagree, and possibly try to club me to death if I walk on campus.

I’m ending my financial and other support for #UCBerkeley (for my safety): https://t.co/jnH79LGNEr #MiloYiannopoulos #Hitler

Yesterday I asked my most liberal, Trump-hating friend if he ever figured out why Republicans have most of the Governorships, a majority in Congress, the White House, and soon the Supreme Court. He said, “There are no easy answers.”

I submit that there are easy answers. But for many Americans, cognitive dissonance and confirmation bias hide those easy answers behind Hitler hallucinations.