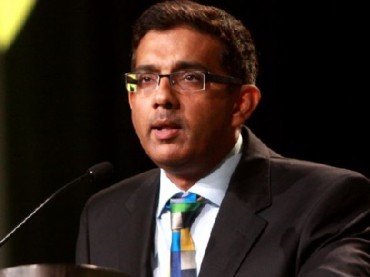 A campus lecture by embattled conservative filmmaker and author Dinesh D’Souza slated for Tuesday night at the University of California – Santa Barbara was abruptly cancelled after the judge overseeing D’Souza’s probation for his campaign finance law violation rescinded permission for the pundit to speak.

“The judge was receiving pressure from liberals for his decision to allow the event to go on and as a result decided to reverse it just days before the scheduled event,” according to a statement Tuesday by Young America’s Foundation, which was co-hosting the event along with the UCSB College Republicans. “Young America’s Foundation believes that the judge’s ruling is restrictive of Dinesh’s free speech rights and another example of liberal suppression of conservatives.”

D’Souza, an outspoken critic of liberal policies and President Barack Obama who produced the docu-dramas “2016: Obama’s America” and “America: Imagine a World Without Her,” had originally been granted permission to give the campus speech by U.S. District Judge Richard Berman, who in late September sentenced D’Souza to five years probation, a $30,000 fine, and eight months in a so-called community confinement center in San Diego.

“The judge had ruled that Dinesh’s events in Santa Barbara could go on since it would be a day’s travel and he would be able to return to the Community Confinement Center by the end of the night,” the foundation stated. “However, we were alerted yesterday that the judge reversed this ruling … forcing Dinesh to cancel the event.”

UCSB College Republicans Vice President Austin Yack said he and his peers are upset. They worked hard to personally fund raise $5,000 to help pay for D’Souza’s guest lecture, and had to hurriedly contact the 60-plus guests and donors who had RSVP’d for the event over the last few days to tell them it was cancelled, he said.

“It stinks,” Yack said in a telephone interview with The College Fix. “It’s a huge hassle. … And the community was really looking forward to hearing him speak.”

A recent appearance by D’Souza on Fox News may have helped prompt the turn of events. D’Souza obtained a day pass to New York City last week and told Megyn Kelly in a guest appearance that he does not have to wear a prison uniform and that he only spends nights at the confinement center.

Some liberals were enraged by this information.

“Dinesh D’Souza Even Gets A Day Pass To Visit Megyn Kelly. Some Prison, Huh?” declared a headline on CrooksandLiars.com, calling the set-up “summer camp on the taxpayers’ dime.”

“As arrogant as ever, D’Souza touts his conviction and sentence as ‘a political win,’” the website stated. “Only two weeks in the pokey and already Dinesh is out prowling on a day pass. Oh justice, where is your sting?”

Of course, others saw the interview in a different light.

“Dinesh D’Souza is allowed to do ‘government-approved’ media interviews during the day while he is locked up with murderers and drug dealers at night,”reported the conservative BizPacReview.com.

After the sentencing, D’Souza called it a “fair judgment.” It remains to be seen what he thinks of this latest development. His Twitter and Facebook accounts did not mention the UCSB incident as of Tuesday night.

“The judge backed off because of liberal pressure,” he said.

D’Souza had originally been scheduled to speak at UCSB in May, but the appearance had been postponed because of the mass-murder spree at the Southern California campus.