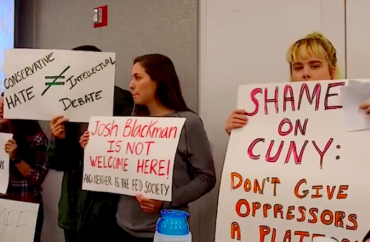 ‘Intimidating enough to discourage some students from entering the room’

City University of New York is facing new scrutiny for its law students’ continual disruption of a visiting speaker and Law Dean Mary Lu Bilek’s approval of their disruption.

Four professors from component colleges of the public university – none of them in the law school, whose faculty have remained silent – have publicly challenged Chancellor James Millikin to explain whether their classes “can be subject to disruption from student critics as a matter of policy.”

They wrote to Milliken in their capacity as members of CUNY’s Association of Scholars, asking the chancellor to “clarify CUNY policy regarding disruption of events in which a student or faculty organization invites an outside speaker”:

While such disruptions on college campuses have become increasingly common, we believe this one merits special attention because—unlike administrators in most recent cases—the law school’s dean appears to condone the behavior of the hecklers. …

Dean Bilek cited no provision of the student handbook to sustain her claim that “limited” disruptions of an invited speaker’s talk [in this case, 8 consecutive minutes of a 70-minute event] do not violate CUNY policy. The handbook, we should note, implies the reverse …

They reminded Milliken that the invited speaker, South Texas College of Law Prof. Josh Blackman, has said the antics of the student protesters “were intimidating enough to discourage some students from entering the room while the protesters were there.”

Days after an “unnamed administrator” warned the disruptors that they “may not keep anyone from speaking,” a CUNY spokesperson walked back that unequivocal warning by seemingly equating disruptive protests with “free speech,” the professors wrote. Then came Dean Bilek’s endorsement of disruptions that are “limited”:

Simply put, the CUNY policy that she articulated permits its students to use tactics that silence speakers and frighten potential audience members — as long as the disruption occurs in doses of an unspecified limited length.

The ripple effect of this ill-conceived policy on campus discourse is likely substantial. How many speakers would want to deliver lectures on campuses where intimidating disruptions are deemed acceptable by the administration? Further, what message does that policy send to students and faculty members on those campuses who might wish to express unpopular views? By labeling as reasonable the shouting down of speakers, CUNY will surely undermine civil discourse on its campuses.

MORE: Students explain their disruption: They wanted a ‘safe space’

The letter to Milliken was posted by Blackman on his blog.

The National Association of Scholars, to which the CUNY association belongs, released its own statement on disruptive protests of invited speakers, which “have become too numerous for most of us to keep track”:

But we ought not to let the enemies of academic freedom establish a new normal in which they shout down, heckle, or seize the stage from a speaker. It is important both to take public note of these assaults on intellectual freedom and to call to account the academic administrators who permit the disruptions to unfold, ignore their institutions’ own policies, and sometimes condone the disruptions after the fact.

CUNY profs, including @kcjohnson9, condemn dean's risible statement that hecklers' failed attempt to shout down @JoshMBlackman wasn't disruptive. Next up: crim law course at CUNY teaches that shooting at people is no longer a crime if your shots miss. https://t.co/AoktljBzN3

Read the professors’ letter to the chancellor and NAS statement.