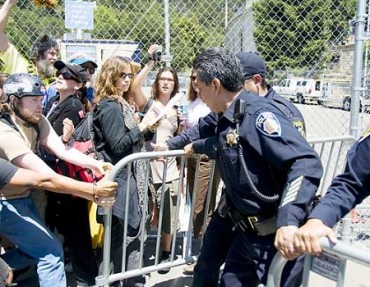 UC Davis isn’t just a university – it’s a small city on its own.  The necessity of police protection for such a place would seem obvious, and until recently, it was obvious. That was before Occupy UC Davis became the dominant voice on campus.

There is perhaps nothing so dangerous as a movement with utopian dreams and real-world power.  The Occupy UC Davis movement was handed instant celebrity by a can of pepper-spray and a handheld video camera and proceeded to use that celebrity for their own purposes. The unnecessary and short-sighted action taken by the UC Davis police gave protesters exactly what they needed: martyrdom and momentum.

Not willing to let an injustice go unexploited, recently sprayed protesters tearfully addressed crowds of temporarily outraged students at rallies, declaring shrilly that things would have to change.  Indeed, change seemed reasonable to most in light of the obvious ugliness of the pepper-spray incident. But unfortunately, the changes proposed by professional protesters and extremists controlling the movement would make the UC Davis campus far uglier than it was on the night of November 18.

UC Davis isn’t lawless – yet. In 2010, the school’s police department responded to 21 forcible sexual assaults, 11 aggravated assaults, 5 weapons offenses and 88 burglaries on campus.  The 48 armed officers of the department are responsible for providing 24/7 coverage of a huge area encompassing 1,100 buildings on 5,500 acres.  6,500 students live on campus. During school hours, the campus population swells to as many as 55,000.

Aside from calling a campus-wide general strike, (which has fallen into a malaise almost immediately), protest leaders have called for the abolition of the UC Davis police force and a police-free campus. The English department, led by charismatic protest leader Nathan Brown, issued a statement that included the following proposal:

“…given the demonstrable threat posed by the University of California Police Department and other law enforcement agencies to the safety of students, faculty, staff, and community members on our campus and others in the UC system, we propose that such a policy include the disbanding of the UCPD and the institution of an ordinance against the presence of police forces on the UC Davis campus, unless their presence is specifically requested by a member of the campus community.”

While skeptics might point to the notoriously feather-brained tendencies of English professors as the source of the extreme proposals, the plan for abolishing the UC Davis police force has widespread support within the Occupy movement. Speakers at protest gatherings have repeatedly claimed that the police are the greatest danger to students on campus, repeating the mantra until it seems irrefutable.

But are police the greatest danger to protesters? Or is it possible that there are other dangers on campus that make police desirable or even essential?  Without men and women in uniform protecting the users and residents of the university, a relatively safe zone would inevitably become a criminal quagmire. UC Davis would be effectively advertising a law-free zone to the criminals and gangbangers of the greater northern California area.

Of course the English department and some of the more savvy protest groups have hedged their bets by allowing for police to enter campus if specifically requested “by a member of the campus community.” But for those familiar with the vast sweep of acreage that comprises the campus, and the thin staffing of the City of Davis police force, it is obvious that such protection would be inadequate. And the logic of such a system is brutal. If a woman is assaulted on campus, she can then attempt to call police, hoping that an officer can reach her in time. But the patrols that could have prevented an assault in the first place will be gone. Instead of preventing crime, what few police are available will be forced to take a purely reactive stance.

Read the rest of this column at the Sacramento Conservative Examiner.