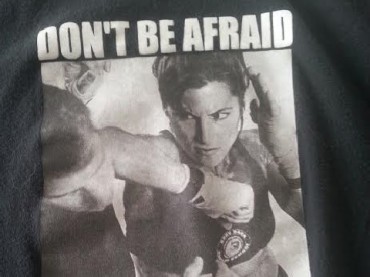 I was recently attacked by three large guys at once.

One man grabbed me by the hair and yanked me. Then another man choked my neck from behind. The third man yanked my arm toward him. Over and over again, they attacked.

Each time they assaulted me, I responded by yelling “No! No! No!” at the top of my lungs as I drove into their attacks, sending a series of defensive strikes to their faces, bodies and groins.

I’d pluck off the choke, kick them in the groin, hammer fist their faces, palm strike their jaws. Whatever it took to free myself of their attacks. I kneed them in the stomach, threw elbows into their faces, sent my foot crashing down on their knees, and grabbed and yanked at their privates. Finally, after what seemed like an eternity but was more like two minutes, their attack was over. I stood there panting and exhausted, but proud of myself. I’d fought them off.

If that were ever to happen in real life, I’ll be prepared.

What I just described was a “final exam” of sorts I recently took in my beginning Krav Maga class.

Called “the circle of death,” it’s a high-stress exercise designed to test my mental and physical defense skills were I to be attacked in the world outside the martial arts studio – a test my instructors require to move from beginner to intermediate classes. It’s a mock fight of sorts, but it’s very intense and stressful.

In the year leading up to my “circle of death,” I had dreaded that test, but I am proud to say that today I wear an orange belt: the first color in the intermediate classes. I passed.

I tell this story as national news breaks today that the newly crowned Miss USA has been criticized by some for suggesting self defense martial arts as a legitimate way for young women to stop an assault.

‘We shouldn’t teach women self-defense so they can avoid being raped, rather we should only teach men it is bad to rape.’

That’s the logic coming from leftist feminists in response to Miss Nevada Nia Sanchez, now Miss USA, suggesting last night that women should learn self-defense in order to prevent or avoid being sexually assaulted. Sanchez is a fourth degree black belt in taekwondo.

First, Miss Nevada’s suggestion during Miss USA last night and after she won the title:

“I believe that some colleges may potentially be afraid of having a bad reputation and that would be a reason it could be swept under the rug, because they don’t want that to come out into the public,” Nia Sanchez said. “But I think more awareness is very important so women can learn how to protect themselves. Myself, as a fourth-degree black belt, I learned from a young age that you need to be confident and be able to defend yourself. And I think that’s something that we should start to really implement for a lot of women.”

Pavlich proceeds to cite several tweets that mock those suggestions, including:

Miss Nevada might be gorgeous, but needs to realize teaching self defense to women isn’t the solution for ending sexual assault #YesAllWomen

I get that the college sexual assault problem can’t be solved in 30 secs but still icky to pretend like self defense is the answer. #MissUSA

That last Tweet came from the community manager at Cosmopolitan women’s magazine. If that is the face of modern feminism – count me out.

Self defense is real feminism. Learning how to fight back enough so that you can survive or stop an assault is way more empowering than taking to Twitter to whine about the rape culture or walk around the street in your underwear and bra while demanding “no means no!” (Yes, that’s a real thing, it’s called a slut walk).

I’ll show you no means no, with my foot kicked straight up your nether region.

Will learning Krav Maga save my life if I am attacked? Maybe. I sure have a better fighting chance than women with zero training. You have no idea what you didn’t know about self defense until you take these classes. It will open your mind to a whole new level of protection. Today some college campus officials advise women to throw up or urinate on their attackers, or tell their attackers they are on their period or have an STD. That “pens, peeing and puking” defense is the most unempowering advice ever. That is essentially telling women they have to beg for mercy from a maniac.

I don’t have to beg for mercy. I have the tools to fight back. So do all the women who take the classes alongside me. Easily one-third of the classes I take are comprised of women. Our main instructor is a young gal who is about 5’4 and a buck-twenty, but I promise you, you do not want to get into a fight with that feisty black belt.

Krav Maga is what the Israeli Defense Forces – which includes women – is taught to protect and defend themselves. It’s not the typical martial arts, it’s how to survive a street fight. I spent an hour this morning learning how to counter someone trying to stab me with a knife, for example. My 6-year-old daughter will soon be enrolled, and my teenage son already is.

Is self defense “icky”? Yes, after a class I am dripping with sweat. Yes, my required pants make me look like a sack of potatoes.  Yes, there are times when I have to simulate defensive moves against big, sweaty, hairy guys “attacking” me.

But my life is worth it.

These women who spoke out against Miss USA Nia Sanchez and presume to speak for modern feminism are completely out of touch with reality.