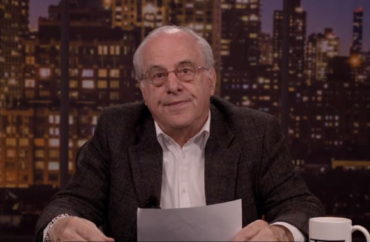 A longtime economics professor argues that capitalism is accountable for the shortages, economic downturn, and vast spread of the novel coronavirus in the United States.

In a variety of recent public statements, economist Richard Wolff argues that “the catastrophe we are living through was caused by a capitalist system that could not anticipate, plan for, or cope with the coronavirus.”

Wolff has been an economics professor for more than 50 years and has taught at Yale and the University of Massachusetts Amherst and is currently a visiting professor at the New School University in New York City. Often described as a “Marxian economist,” Wolff was named in Jacobin magazine as one of the “greats of contemporary Marxian political economy.”

In a March 31 YouTube video titled “Capitalism is making a mess of the coronavirus crisis,” he argued that “private companies have no incentive to produce test kits and store them in a warehouse for years before there’s a crisis. It’s not profitable.”

Wolff told The College Fix that economic systems have a duty to look after public health, something that would have occurred under socialism.

“A socialist system would much more likely have required production of all the needed supplies (tests, ventilators, beds, etc.) and stockpiling them around the country,” he told The Fix via email.

Asked whether China, a prime example of centralized government, had a role in instigating the pandemic, Wolff said that “whatever the Chinese did or did not do, it is the job of all other societies — their private sectors and their governments — to prepare for and cope with viruses that can come from anywhere anytime.”

“That preparation and coping are extreme failures of both private sector and gov’t in the US. Blaming the Chinese or anyone else is purely diversionary … an effort to focus blame anywhere else but at the systemic failure. The tragedy of that is by leaving the system as it was, the next crisis is assured.”

On March 15 the scholar tweeted “Corona virus as an excuse?”

Corona virus as an excuse?

Mutating viruses have always been with us. A rational economic system would have learned to plan and manage them.

Capitalism failed to learn because profit was/is its #1 priority.

“Mutating viruses have always been with us,” continued the tweet, which he has since pinned to the top of his profile. “A rational economic system would have learned to plan and manage them. Capitalism failed to learn because profit was/is its #1 priority. Capitalism caused today’s disaster, not the latest virus.”

And in a recent article, “Coronavirus: A Capitalist Crisis,” Wolff argues that the United States government and private sector both failed to prepare for the coronavirus pandemic and were instead beholden to a “private profit mentality.”

“The catastrophe demonstrates the results when public health is subordinate to private profit and to a governmental apparatus that adulates the superiority of private over public administration,” he wrote.

“U.S. capitalism failed at everything on this partial list of ‘shoulds,’” he added. “Capitalist industries failed to serve public health because private profits were an inadequate incentive for them to do so. The government failed to compensate for private capitalism’s failures, as usual, because government leaders (drawn heavily from corporate CEO ranks) share similar mentalities.”

Wolff wrote that after witnessing this crisis he hopes that the United States will implement socialized health care and more socialist policies broadly.

“Will the parallel preparatory failure of the U.S. government, long captured by its corporate donors in general and those in the medical-industrial complex in particular, boost a resurgent U.S. socialism? Or will a traumatized, socially distanced population turn rightward instead to a dictator for salvation from a clearly out-of-control crisis?”