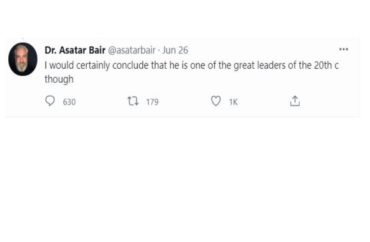 Asatar Bair, an assistant professor of economics at Riverside City College, is a self-described communist and supporter of Joseph Stalin. He recently praised the communist dictator as one of the greatest leaders of the 20th century.

Last week, Bair tweeted his support for Stalin, the communist revolutionary who ruled the Soviet Union from 1927 until he died in 1953.

Bair described Stalin as “a very successful revolutionary, a great contributor to Marxist theory,” as well as a “great listener and collaborator during discussions.” Bair added he “would certainly conclude that he [Stalin] is one of the great leaders of the 20th c [century]”.

People say I 'idolize' Stalin. Not true, I hold a fair and balanced view. The man was neither savior nor saint, but he was, at once, a very successful revolutionary, a great contributor to Marxist theory, and said to be a great listener and collaborator during discussions

Bair did not respond to repeated requests for comment this week from The College Fix.

Paul Kengor, a professor of political science at Grove City College, told The College Fix via email he is not surprised by Bair’s statement.

“The professor is a Marxist, after all. I’ve seen countless statements from Marxists over the years praising Stalin as a ‘great’ leader or one of the ‘greatest leaders’ of the 20th century,” said Kengor, author of the 2020 book “The Devil and Karl Marx: Communism’s Long March of Death, Deception, and Infiltration.”

“The professor attempts to qualify the statement somewhat by saying Stalin … was neither savior nor saint, but was a dazzling revolutionary and contributor to Marxist theory and ‘discussions,’ and a damned good listener. That’s all typical, too,” Kengor told The Fix.

“I’ve heard it all before: ‘Well, Dictator So-and-So may have killed thousands or millions of people, but he liked puppies and lollipops and he meant well.’ The reality is that Joseph Stalin was one of the greatest killers in human history, period.”

“Moreover,” Kengor added, “his implementation of Marxism, particularly the banning of private property, was directly responsible for the deaths of millions through famine, gulags, and purges. Stalin was neither savior nor saint; he was a monster.”

“Millions of Soviets were killed, jailed and repressed by Stalin,” Johns said. “There is no gray area in assessing the legacy of a man who expanded the former Soviet Union’s gulag system, exterminated the kulaks, orchestrated the Great Famine and Great Purge, and had his citizens summarily executed or sent to labor camps.”

Bair also has tweeted support for the Chinese Communist Party, and alleged that the United States is engaged in a propaganda campaign to smear them.

Bair also argued on Twitter that “China’s use of state power is for the benefit of their people. Would you claim that for the U.S.?”

Just last week, Bair praised Mao ZeDong, founder of the Chinese Communist Party, as “a great humanitarian leader,” arguing famine had always been a problem in China and there is no evidence mass starvation “was the plan of Mao or the desire of anyone in the CPC.”

He has also responded to criticism of his Stalin-praising.

My new friends, I defend Stalin because of the results achieved by Soviet socialism for the masses of ordinary working people, including a massive increase in life expectancy (one of history's most rapid in fact), dramatic decreases in infant mortality, and improved health

“Those of us interested in improving the material conditions of life for the average person must carefully study the record of Soviet socialism,” he tweeted.

The Riverside college district’s Chancellor Wolde-Ab Isaac told Fox News that while Bair’s “statements and ideas may be unpopular or even controversial, his right to express himself is constitutionally protected.”