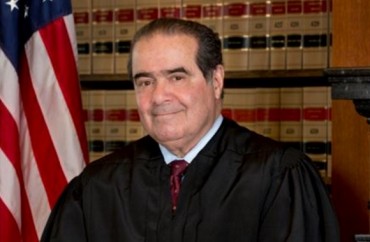 Vigorous efforts by some George Mason University faculty and students to derail plans to name the law school after the late Supreme Court Justice Antonin Scalia have failed.

A message Wednesday from university President Ángel Cabrera informed the campus community that the State Council of Higher Education for Virginia has affirmed the decision to name the law school in honor of Scalia and the decision “requires no further approval and is therefore final. The new name will take effect on July 1.”

“I acknowledge and respect the many opinions that have been expressed about this decision both in favor and in opposition. The wide range of points of view shouldn’t be surprising to anyone familiar with George Mason University, our diversity, and our commitment to free and open dialogue,” Cabrera wrote in the email, a copy of which was obtained by The College Fix.

This marks the end of an effort by disgruntled George Mason University professors who called Scalia divisive, suggested he was a bigot, and complained that the name will brand the school as conservative and turn off secular progressive students from attending.

Two GMU faculty senate resolutions approved earlier this month asked for a delay in naming the school and demanded answers on funding mechanisms bringing about the change.

The $30 million in private donation bankrolling the name change and law school expansion — $10 million of which is coming from the Charles Koch Foundation and the rest from a private donor — comes with provisos that some faculty allege would give donors control of the school’s ideology.

But their complaints were not supported by George Mason University law school faculty. Law professors this month adopted a resolution of their own, which passed unanimously, that accused the faculty senate of “ideological bias” and “unprofessional and dissembling conduct” for trying to “preempt the self-governance and academic freedom of the Law School’s faculty.”

When George Mason University first announced the move to name the law school after Scalia, its officials noted that in addition to serving for 30 years on the U.S. Supreme Court, he also spoke at the dedication of the law school building in 1999 and was a guest lecturer at the university.

A formal dedication ceremony is planned for the fall, they added.

David Rehr, the law school’s senior associate dean, praised the recent decision to finalize the name change, telling the New York Times “we think that looking back five, 10, 15 years from now, people will see it as an important turning point for the law school and for the students here.”

And George Mason economics Professor Tim Groseclose previously told The College Fix in an email that law school professors are excited about the name change and law school expansion.

“One of the great things about the donation is that it comes at a time when law schools are hurting. Some excellent faculty across the country are looking for a job or promotion. Now George Mason is going to be able to hire them,” Groseclose said.

“If you have strong beliefs in the rule of law and originalist jurisprudence, then George Mason is the place is to go to law school. I don’t even think there’s a close second,” he added. “I expect more and more conservative supreme court justices to hire their clerks from Mason and not from Harvard, Yale or the other Ivy leagues. I won’t be surprised if, ten or twenty years from now, we see more more Supreme Court clerks from Mason than any other law school.”