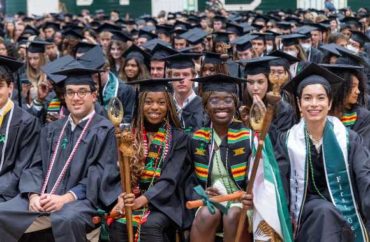 Most members of the Dartmouth College graduating class identify as liberal, while a small minority call themselves conservative, according to a new survey by the campus newspaper.

The Dartmouth, the Ivy League university’s student newspaper, conducted its annual survey for members of the Class of 2022 on their political views and college experiences and reported the findings June 12.

Seven percent of responding graduating seniors said they are “somewhat conservative” and just one percent said they were “very conservative,” compared to eight percent last year, according to the survey.

A strong majority of graduating seniors identified themselves as “very liberal” (39 percent) or “somewhat liberal” (36 percent).

The paper sent the online survey to the 1,143 graduating seniors via email on May 25 and accepted responses through May 29. Just over 12 percent of those surveyed responded.

Respondents do not look favorably on the federal government, though more than half approved of Biden

Approval of the Supreme Court declined sharply from 2021, when 35 percent of graduating seniors approved it and 37 percent disapproved.

In contrast, 11 percent of the Class of 2022 viewed the Court favorably, while 67 percent registered an unfavorable rating, according to the survey.