Students at a Maryland public elementary school were treated to a lesson which compared measures to secure the U.S. southern border to the Japanese internment camps of World War II.

As noted by The Washington Free Beacon’s Matthew Foldi in a Twitter thread, the obvious contrast between the two situations is glossed over in the North Glen Elementary School lesson: Interned Japanese-Americans were U.S. citizens, unlike those detained for illegally crossing the U.S.-Mexico border.

WATCH: 4 year olds in @AACountySchools are falsely taught that Japanese-American internment is comparable to securing our border.

“What do you notice about these two images (above)?” the narrator asks students. “What looks the same? What looks different?”

Racism becomes the focus of the internment: “Japanese people and all Asian people were experiencing a lot of racism. That’s like bullying someone for having a different skin color. And they were being told that they don’t belong in the United States. This is becoming worse for Asian people living in the U.S. at this time. Especially Japanese people.”

The narrator notes some Asian activists have protested the use of the former internment camps to house illegal immigrants  who are trying “to escape violence.”

“Fortunately,” the narrator continues, “Japanese people in the U.S. continue to speak up for respect and fair treatment of all people — including the people detained at the borders right now.”

WATCH: A virtual lecture for Asian-American History Month @NGlenESaacps, a pre-K through 5th grade school @AACountySchools, compared the US imprisoning more than 100,000 U.S. citizens in the 1940s to detaining illegal immigrants in the present dayhttps://t.co/ULzfsKUlmj

The video concludes with the claim that this vocal opposition is “yet another example” of the Asian community joining with others to “speak up for human rights and justice for all.” 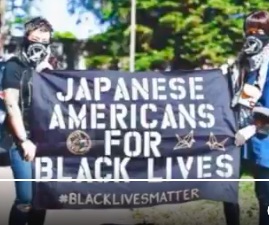 The Free Beacon notes Anne Arundel (GOP) County Councilman Nathan Volke called the lesson “disturbing” and said “there is no parallel” between the WWII internment and the detention of illegal immigrants. He added such teachings “further reinforce the concerns that so many parents are raising about critical race theory …”