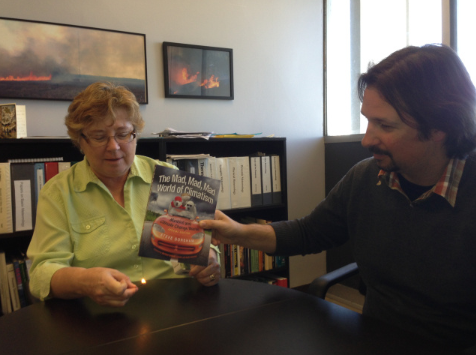 They say a picture is worth 1,000 words, and such is certainly the case coming out of San Jose State University, where two environmentalist professors took a match to an anti-global warming book – plus a photo of their little exercise – leaving an image that clearly illustrates the state of science-based academic freedom on college campuses nationwide.

The image appeared on the university’s official Department of Meteorology and Climate Science webpage, no less.

The academics who took flame to page are Dr. Alison Bridger, chairwoman of the university’s meteorology department, as well as Assistant Professor Craig Clements. The offending book? The Mad, Mad, Mad World of Climatism: Mankind and Climate Change Mania.

The educators wrote in a cutline under their picture that they’re testing the flammability of the book.

After a screenshot of the image recently made it onto the popular “wattsupwiththat” global warming and climate change website under the headline “San Jose State University Meteorology decides burning books they don’t agree with is better than reading them,” the picture and post were removed from the university’s website.

Anthony Watts, who posted the image on wattsupwiththat, made sure to save screenshots, and rightly noted:

“From the Fahrenheit 451 department comes this indictment of California’s higher education’s “tolerance” for opposing views. When I first got the tip on this, I thought to myself “nobody can be this stupid to photograph themselves doing this” but, here they are, right from the San Jose State University Meteorology Department web page …”

The offending book, with a tagline “climate change is natural, cars are innocent,” was published in August and is heralded by the nonprofit Heartland Institute, which sent the professors a copy of it in April, according to the professors’ cutline under their photo.

So what got these scientists all riled up?

Information on the Heartland’s website describes why some in the academe may take offense to the book:

If you accept the dogma of Climatism, greenhouse gases from industry are causing catastrophic global warming. Melting ice caps, rising oceans, stronger hurricanes and storms, droughts and floods, species extinction, polar bear starvation, heat waves, disease, ocean acidification, and air pollution are all a result of man-made climate change, according to experts.  As a result, we must curb our evil carbon-emitting ways.  The proposed remedies by Climatists are many and cover all parts of our society:

… If you’re an educator, teach your students that “if you change light bulbs, you can save polar bears.” Wind and solar are good, while coal and oil are bad. Teach them that we’re running out of natural resources, overpopulating the Earth, and must change our ways if we’re to save the planet.

In effect, the book spells out the state of climate studies in higher education, and clearly these two San Jose State University professors don’t appreciate its message.

The real tragedy here is, instead of giving the book a well-meaning read, they dismiss it out of hand. Instead of offering students two sides of the story, they only give them one.

It’s not a stretch to assume that other academics the Heartland Institute sent the book to undertook similar measures (e.g. the trash can). You can bet it wasn’t donated to the campus library.

This should be taken seriously, folks, because students who study climate data under devout Global Warmers are ultimately the scientists who come up with data that influences the media and Congress to create onerous business regulations that ultimately hurt your pocketbook and the nation’s economy.