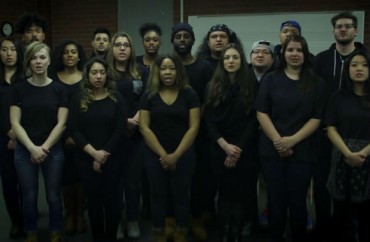 Seattle Pacific University’s administration folded to many of the demands of the SPU Justice Coalition – apparently composed of fewer than 20 students – for a diversity czar, “justice and cultural credibility” leadership requirements, and race-focused faculty hiring, among others.

SPU President Dan Martin couched the slew of new initiatives in evangelical-speak in a message to the community in late February, saying that “any aspect of racial bias or exclusiveness is a breakdown in the community we are called to be.”

Threatening to use ‘other avenues’ for change

The Free Methodist university has experienced similar convulsions around race and injustice as the University of Missouri, Yale and others since November, though SPU’s cave-in closely followed a campus event featuring a Black Panther leader.

But his refusal at the forum to answer questions submitted by a group of student activists, under the hashtag #askDan, led to an angry letter Jan. 25 by those students.

“We expected a certain level of preparation and thoughtful consideration before this forum,” reads the letter, signed by 19 students, “but we were left sobered by the low standard of preparation that became apparent to us when the day arrived.”

They threatened to use “other avenues” to raise their voices if requests for further forums “are not fulfilled within the timeframe of four weeks.”

Women and minorities must be 2/3 of finalists

Two weeks later, the SPU Justice Coalition released a “unity petition” that called for a “Chief Diversity Office.” As of Sunday night it had reached 919 signatures out of its goal of 1,000.

The petition said the university’s structure “suppresses minority cultures and identities by perpetuating the notion that Western white evangelical culture is socially and theologically normative, thereby inhibiting the personal and communal development of minority students.”

The proposed diversity office would be responsible for a variety of vague goals in the direction of making campus culture more “welcoming and supportive,” as well as ensuring there are “incoming pools of well prepared, pre-college students from underserved backgrounds.”

The petition calls for an anonymous reporting system under which students could immediately report any incidences of “inappropriate behavior and speech from faculty, staff, and student leaders,” and a similar system for faculty. Current student evaluations at the end of each quarter do not “reflect the urgency of the incident that has occurred,” the petition states.

Faculty hiring would be restructured under a committee system that includes “racial, gender, and disciplinary diversity,” the petition states. The committees “must actively seek” students that have “expressed commitment to reconciliation and diversity on campus” to participate in hiring decisions.

Every new hire pool must “generally … include at least one woman and one person of color in the final three candidates.”

Black Panthers are ‘what America should be’

Various classes concentrated in sociology, theology and communications would satisfy a proposed “Justice and Cultural Credibility Requirement” for not only faculty, staff and administrators, but also any student seeking a leadership position, according to the petition. Courses that would satisfy the requirement include “Social Inequality: Power and Privilege” and “Race and Ethnicity.”

The petition, which says its demands must be met by May 1 or “various campus wide demonstrations” will ensue, has been signed by current students and alumni, as well as faculty, staff and administrators.

Students at SPU created a "justice coalition"…sit the fuck down you private school pricks ??

Less than two weeks after the petition was posted, the co-founder of Seattle’s Black Panther Party spoke at SPU at the invitation of its Black Student Union, explaining that the original party’s use of violence was purely defensive in nature, The Falcon reported.

Provost: Equal opportunity is a myth

Activists didn’t get everything they wanted from the administration, but they may get more than they bargained for.

Ostensibly a report to the winter meeting of the board of trustees on SPU’s “action plan” for “racial diversity, equity, and inclusion,” Martin wrote that SPU’s plans “align well” with the Justice Coalition’s demands.

Important SPU news!The continuing efforts of SPU’s Students for Change and the SPU Justice Coalition have led to this…

While it won’t create a full office, SPU will hire a chief diversity officer in the next academic year to join Martin’s senior leadership team.

Martin said the administration has hired a diversity consultant, Pete Menjares of the Council for Christian Colleges and Universities, to help develop SPU’s racial competency.

Posted by Council for Christian Colleges & Universities on Friday, October 9, 2015

The president commissioned a report due April 15 on the logistics and legal viability of an anonymous reporting system. SPU will develop faculty and staff plans for “intercultural competencies, culturally responsive teaching, and mitigating micro-aggressions,” Martin wrote.

That last process will be overseen by Provost Van Duzer, who indicated at a March 1 race forum where his priorities lie.

Given the choice between hiring a white person with a score of 83 out of 100, and a person of color with a rating of 80 out of 100, Van Duzer said he would give the job to the less-qualified person. There was probably inherent bias against people of color in that hypothetical search committee, he explained.

Tali Hairston, director of the school’s Perkins Center for Reconciliation, answered the student: “When are Christians going to abandon the myth of meritocracy?” Hairston has previously said that white evangelical students are ignorant of their own “deficit of cultural literacy.”

The SPU Justice Coalition declined to comment on its petition and aims. The administration did not respond to requests for comment.