Weinstein and his wife resign from school as part of agreement

Evergreen State College has settled a tort claim against it from embattled Professor Bret Weinstein and his wife, Professor Heather Heying, for $500,000, according to an email sent to faculty Friday evening.

“They have resigned from their faculty positions at Evergreen, effective today. The college will pay them a total of $450,000 and contribute an additional $50,000 toward their attorney fees,” according to the email, sent by John Carmichael, chief of staff and secretary to the board of trustees.

“In making this agreement, the college admits no liability, and rejects the allegations made in the tort claim,” Carmichael wrote.

Weinstein and Heying, both biology professors, had originally sought $3.85 million in their claim, filed July 5. It alleged that the public university “permitted, cultivated and perpetuated a racially hostile and retaliatory work environment.”

“Through a series of decisions made at the highest levels, including to officially support a day of racial segregation, the college has refused to protect its employees from repeated provocative and corrosive verbal and written hostility based on race, as well as threats of physical violence,” the claim alleged.

Back-up documents in the claim, a copy of which was obtained by The College Fix, detail a long and divisive battle between some faculty at the school seeking to install race-based equity plans and conscientious objectors such as Weinstein and Heying who voiced concern about the plans and supported colorblind policies.

The couple, and especially Weinstein, was frequently called racist by peers in emails. Colleagues were upset the couple would not support the plans to elevate faculty on the basis of race, or support the “Day of Absence,” in which white people were asked to remain off campus for one day in April so students and faculty of color could commiserate about oppression and similar topics.

Weinstein and Heying could not immediately be reached for comment late Friday by The College Fix.

In his email alerting faculty to the agreement, Carmichael denied that the Day of Absence was discriminatory, and added college officials “took reasonable and appropriate steps to engage with protesters during spring quarter, de-escalate conflict, and keep the campus safe.”

His memo does not address how Weinstein was cornered in May in a campus building and blocked from leaving by rowdy student protesters furious he did not support the Day of Absence, videos of the incident show. Nor does it mention how Evergreen’s then-chief of police subsequently told Weinstein his safety on campus could not be guaranteed, and that it appeared student agitators were looking for him, forcing Weinstein to hold his class in a park.

According to the tort claim, at a campus meeting to address the racial unrest, Weinstein was also scared for his personal safety, that the meeting “became heated and threatening at times. There was only one exit, and it was completely blocked by protesters.” Campus officials had also instructed university police to attend the meeting unarmed, according to the claim.

MORE: Evergreen pledges to train students not to discriminate against white people

The claim also included emails and screenshots of social media comments from Evergreen Professor Naima Lowe toward Weinstein and Heying that were hostile in nature. One example included a Facebook post in which she wrote: “Oh lord, could some white women at Evergreen come and collect Heather Heying’s racist ass. Jesus.”

“This post prompted other faculty to call Professor Heying a racist as well,” the claim added. 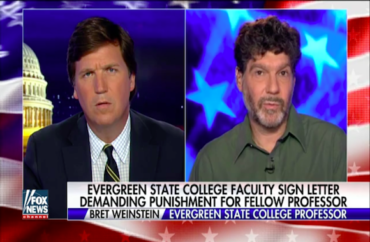 In an email included in the claim from Lowe to Weinstein, she did not deny her words. Wrote Lowe: “I said ‘collect’ because I think that white people are responsible for dealing with other white people when they are doing racist things. Your wife was doing a racist thing. You are doing many racist things. One of the most racist things that you are doing is insisting on a victim narrative about this situation and sharing that with alt-right media darling Tucker Carlson.”

Lowe was not alone in her beliefs. In late May more than 50 professors at the college–nearly a quarter of faculty–signed a statement calling themselves “angry and frustrated and concerned” by the backlash against the school–and blamed Weinstein for it, demanding he be punished.

“On its official website, the college asserted that it had never asked whites to leave campus on the Day of Absence—a demonstrably false statement. It also asserts that ‘demonstrations were nonviolent and took place…in isolated areas of the college,’ which is also false,” the claim alleged. “In doing so, [Evergreen College] continued to support its facially discriminatory conduct, publically rejecting Professor Weinstein’s complaints of racial segregation for which he has been repeatedly excoriated, threatened, attacked, and wrongly accused of being a racist in the workplace, for months.”

In his memo announcing the settlement, Carmichael stated the decision was made in part to avoid a long and ugly court battle.

“This agreement is in the best interests of Evergreen,” Carmichael stated in his memo. “Years of expensive and time-consuming litigation would not help us achieve our mission.”