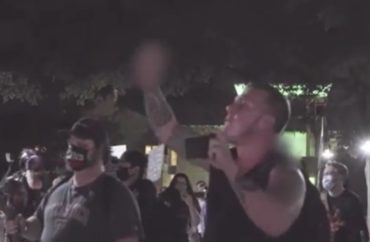 “The protesters, who reportedly numbered in the hundreds, chanted blasphemous slogans and attempted to drown out the small group of students gathering to demonstrate against abortion,” Fox News reported.

“Fascists are organizing in your area,” a news release said, according to Fox News. “Tonight the young conservatives have invited groyper influencers & white nationalists such as Lance Johnston to a pro life ‘vigil’ in supporting christo-fascist abortion legislation.” Fox News did not link to the news release in its article.

One person screamed “F*** your God” at the students who had said “Christ is King.” Fox News identified the protesters as being aligned with Antifa.

We might be outnumbered by the leftists on campus but we are just as loud, if not louder pic.twitter.com/trJV64KdFJ

Kelly Neidert, the chair of the conservative student group, has been targeted before by leftists, including a possible witch.

A UNT graduate, Anna Katz, tweeted a photo of a ‘hex’ at Neidert in 2020. “I think that is a demonstration of pure evil,” Nedert told the Washington Free Beacon. “It’s not cute, it shouldn’t be a trend, that’s actually evil. Considering the card said ‘the devil’ on it … we shouldn’t be interacting with anything that has something to do with him.” 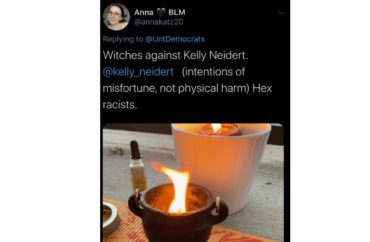 The university defended the protesters actions in a statement sent to Fox News.