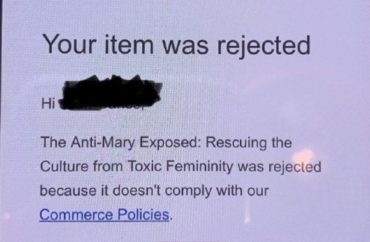 Told seller that it violated a rule against selling ‘adult products’

Facebook has censored posts promoting a book from a Catholic professor that criticized feminism.

Facebook removed posts that advertised “The Anti-Mary Exposed: Rescuing The Culture From Toxic Femininity,” a book from Pontifex University’s Carrie Gress. The posts were deemed in violation of the company’s “commerce policies.” Facebook owns Instagram.

“A bookstore tried to post the book on both those platforms and got the same message- that the book violated community policy,” Gress told The College Fix via email.

Facebook told Guadalupe Gifts that it could not sell the book on its platform because it violated commerce policies. “Listings may not promote the buying, selling, or use of adults products” Facebook said in an email to the Catholic gift store on January 24. The store told The Fix that as of February 3 it has not received any further explanation from the tech company.

“Instagram removed the product link we added over a year ago,” the Catholic gift store said on January 24.  The photo sharing app said that the gift store’s post “doesn’t follow our policies about what can be sold on Instagram.”

Facebook did not respond to two emails from The Fix sent in the past week to its general press account, asking for comment on the situation. 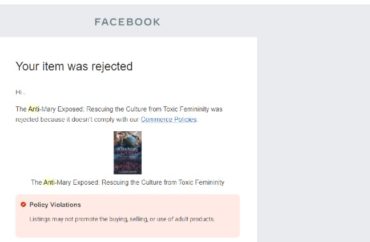 Gress told The Fix that the book dives into the ideology of “radical feminism” and provides solutions for confronting it.

“The first half of the book is the ideological blueprint for radical feminism that we see in the culture today and also in the LGBT movement that has followed in the heels of feminism,” Gress said. “The second half, is really the remedy of how Christianity and specifically Our Lady, have been the key to understanding womanhood.”

“But it is truly the first half, that is written in clear jargon free language that exposes the Marxism and the occult elements at the foundation of feminism that has to be what is driving any kind of a ban,” Gress told The Fix. Appropriately for the censorship she is facing, the book “also explains how elite women silence any voice not in accord with theirs, so no surprise that my book is being censored.”

Gress said that Amazon was cancelling orders and only making the book available through third-party sellers on Amazon. The book was reinstated on January 27 and out of stock the same day. On January 28 it was in stock again and then out of stock about an hour later.

Amazon’s media relations team did not respond to an emailed request for comment this week on Gress’ comments.

The controversy around the censorship has not hurt Gress. TAN Books, another Catholic bookseller, said it has sold out of copies of her book.

“Due to the overwhelming support of @carrie.gress’s The Anti-Mary, we have sold out of copies! Thank you for showing tremendous support for this excellent book,” TAN Books said in an Instagram post on January 26. The book seller told The Fix it had recently sold at least 800 copies of Gress’ book.