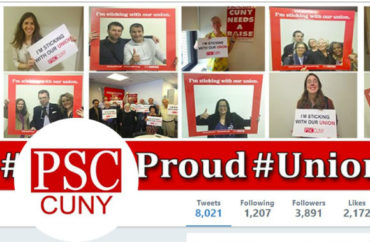 ‘This has been a repeated pattern’ for union leader, professor says

Union rolls were expected to take a hit after the Supreme Court ruled a year ago that public-sector unions can’t compel non-members to pay “agency fees.”

The compelled alternative to union dues, which purportedly cover the cost of collective bargaining, violate the First Amendment rights of government workers, the court said in Janus.

The Professional Staff Congress in the City University of New York brushed off the threat from the ruling, however. By preparing for the worst, the 25,000-member union said it had reached an all-time high number of members.

But its membership numbers have recently been called into question by a New York think tank and a CUNY professor who has long criticized the union’s priorities.

The union’s own federal filings and payroll data confirm about 5,000-6,000 CUNY employees stopped paying after the Janus ruling, with an even higher proportion among part-time employees such as adjunct faculty, according to the report by policy analyst Ken Girardin.

“This has been a repeated pattern of PSC Leader Bowen’s,” KC Johnson, who teaches history in CUNY’s Brooklyn College and its Graduate Center, told The College Fix.

“There are (approximately–the number shifts a bit from year to year) 30k profs, adjuncts, retirees, and staff of various types at CUNY,” he wrote in an email. “But not all of them are members of the union, even though they’re part of the bargaining unit.”

CUNY media relations did not return emails and calls from The Fix seeking comment.

Invalidates thousands who opted out of noncompetitive union elections

The CUNY union covers faculty, grad students and other employees in not only the component colleges and graduate institutions of CUNY, but also New York City community colleges.

But public-sector union membership was not nearly so robust before 1977, when the U.S. Supreme Court set up the agency-fee mandate in the Abood ruling, which Janus overturned.

According to the Empire Center’s Girardin, non-member “contingents” ranged from 5 percent among New York City teachers to 27 percent of the “non-uniformed state workforce.” Abood sent those numbers to 90 percent and higher.

Girardin cited a July 8 letter from Bowen, the PSC president, that praised “the collective power and action of the union’s 30,000 members.” But the union’s own federal filings said it represented 28,380 employees last August, which itself improperly included nearly 2,900 retirees who pay “token” annual dues, the Empire Center analyst wrote.

PSC stands united against detention camps at the border. pic.twitter.com/ttHFKH7CMx

Payroll data from the city and state also confirm a massive drop since Janus, according to Girardin.

PSC membership is likely to fall further because so few public employees know they can leave their unions without paying agency fees, he said, citing a poll commissioned by TeacherFreedom.org. It found a slim majority of teachers didn’t know Janus let them avoid agency fees.

“Bowen has a habit of describing the PSC membership as the total number of employees, rather than actual union members, which has two effects,” Prof. Johnson told The Fix:

First, it erases the thousands of CUNY employees who have chosen not to be members of the union, many as the only means of expressing opposition to Leader Bowen’s agenda (CUNY-wide union elections are routinely one-slate contests). Second, it creates the false impression to outsiders (the meda, politicians, etc) that Leader Bowen represents more people than she actually does.

Grad student membership plunged by half – and more

More important than Bowen’s inflated figure was the fact that “grad students stopped paying en masse” after Janus, Girardin told The Fix in an email. He did not otherwise answer Fix questions.

The plunge makes sense because grad students don’t have the same interests as faculty, Girardin wrote: Their stipends are often set by a source other than their institution, and their relationship is primarily with faculty advisors, not the institution.

“A graduate student with a $25,000 a year stipend would pay $500 in dues to a Communications Workers of America affiliate,” Girardin wrote. The 94-percent plummet among SUNY grad students “is a testament to how improper agency fees were in the first place,” and raises legal questions about Gov. Andrew Cuomo holding grad students to union-set terms, he continued.

Post-Janus membership in the two university systems’ faculty unions fell twice as much as their revenue, according to figures cited by Girardin. He attributed this to lower membership by adjunct faculty, who pay less in dues than full-time tenure-track faculty. About a third of CUNY adjuncts, for example, did not join the PSC.

The overall drop in payers was 10.6 percent, which “translates into a $7 million (4.7 percent) drop in how much the unions would otherwise collect annually,” he said.

MORE: CUNY prof says it has a ‘love affair with violent radicals’