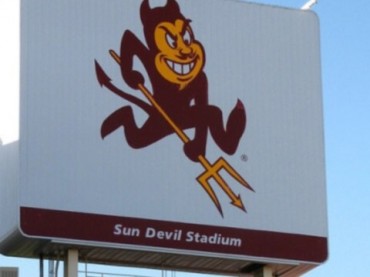 By now many have heard about the infamous “MLK Black Out” frat party at Arizona State University, which took place on Sunday and included basketball jerseys for a dress code, and partiers flashing gang signs in pictures and drinking out of watermelon cups. It made national headlines.

As a student at Arizona State University, I am embarrassed by the nature of this event. It was tasteless, juvenile and wrong.

However, I feel that the reaction from the likes of media, activists and campus administrators has been blown way – way – out of proportion.

The fraternity has been suspended. An investigation has been launched. People have not just accused partygoers of being “racist,” but the actual party itself an example of “advanced racism,” according to one leader in the black community.

“That’s very dangerous especially on a university campus,” Rev. Jarrett Maupin, an area civil rights activist, told KTAR. “A cup made out of a watermelon is advanced racism. Dressing up like, quote, ‘black people’ – that requires research and is advanced racism. We’re not talking about rookie racists.”

The notion that these were just dumb, impulsive college kids doesn’t fit the narrative.

But it’s important to put this in perspective.

Fraternities and sororities throw many themed parties all the time, practically every weekend.

Some err on the offensive side – “white trash” or “redneck” parties are one example. But no one ever cares about white trash or redneck parties. Outrage only seems to come from parties with black undertones.

That is a double standard.

What is even more saddening is to witness local members of the black community use these events as a platform to gain their time in the spotlight for their 20-second sound byte, as was the case with Rev. Maupin.

The president of the African American Men of Arizona State University, as another example, penned an emotional “open letter,” which he promptly plugged via twitter to national media organizations.

There’s something about using what one believes is a tragic event for your own professional gain which doesn’t sit well with me. Is the goal here to create a constructive conversation about race relations and come up with solutions – or is it to have your blog post go viral and see yourself on the 5 o’clock news?

On a national scale, too often we see the Rev. Al Sharptons and Rev. Jesse Jacksons clamoring toward any hint of possible racist activity to push their own personal and political agendas.

Black leaders appear to live to prove racism still exists by decrying a stupid frat party or similar examples, but often fail to mention the violent, senseless and relentless black-on-black crime that is destroying neighborhoods and lives across this country.

Why are our self-anointed civil rights leaders in the black community not talking about the fact that black men make up 13 percent of the population, yet commit 50 percent of all murders nationwide? Where is the outrage about the disintegration of the African American family; that more than 72 percent of children in the African-American community are born out of wedlock?

And in the aftermath of the Trayvon Martin verdict last summer, Laurence Thomas, a black professor in the philosophy and political science departments of the Maxwell School at Syracuse University, wrote this about what he described as “a deafening silence when it comes seeing the wrongs that black people commit against one another.”

“There is an irony here that seems to be lost on everyone. If the only time that the killing of a black person really troubles the black community-at-large is when a white person, rather than a black person, has done the killing, then in effect what is being said is that a black life has more moral value when that life is ended by a white person instead of a black person. And unless I am missing something, that is precisely the point of view that the KKK would hold.”

To me, the insanely high murder rates and rampant fatherlessness in the black community are the most pressing problems it faces. They are something to get upset about. They are far bigger than a few stupid boys dressing up in tank tops and baggy jeans for an MLK Day party.

Let’s not let them drag us away from the real issues at hand.