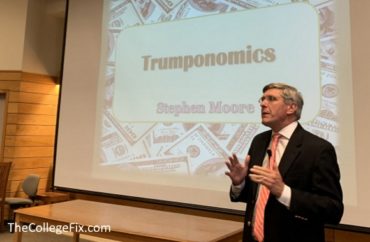 ITHACA, N.Y. — The Cornell College Republicans and Young America’s Foundation co-hosted Donald Trump’s campaign advisor and Federal Reserve nominee Stephen Moore on campus Wednesday evening for a speech in which the economist denounced sky-high tuition costs, cautioned against blind faith in the so-called scientific consensus, and called for the Fed to be an open book.

The appearance began with Vijay Pendakur, Cornell’s dean of students, and Linda Mikula, an events liaison, discussing Cornell’s value statements to the audience. They said the event would proceed without overly disruptive behavior from the audience, and Pendakur made it clear any repeated disruptions would result in potential removal by Cornell police.

Moore’s nomination for the board of the Federal Reserve has drawn criticism for being too partisan an appointment. Moore briefly addressed these concerns at the end of the Q&A.

“If and when I get to the Fed I’m going to be asking a lot of questions, for example, I’m for total transparency at the Fed, I think everything at the Fed should be open to the public,” Moore said. “All their deliberations, all their hearings should be on C-SPAN, so every American knows what they’re doing.”

“I think most Americans think it’s time to do that,” he continued. “In terms of my economic credentials, I think they speak for themselves,” referring to his 35 years of work at think tanks like the Heritage Foundation and Cato Institute, his time on The Wall Street Journal’s editorial board, and his advising of President Trump on the Tax Cuts and Jobs Act of 2017.

During his hour-long talk, Moore spoke about advising Trump during his campaign. He said he encouraged Trump to adopt aggressive pro-business policies like deregulation and tax-cutting to stimulate an economy that was languishing in a post-Great Recession recovery. Moore, author of “Trumponomics: Inside the America First Plan to Revive Our Economy,” displayed several charts concerning economic growth and argued the economy is stronger than ever due to job growth and consumer optimism.

Toward the end of the talk, Moore addressed the issue of rising tuition prices in higher education. He described exorbitant tuition as “thievery.”

“The single biggest financial scam in America is how much universities and colleges are charging our families. It’s just outrageous,” he said. “Every single university in America should be charging half the tuition that they do. And they do that by cutting costs. And it just hasn’t happened in universities.”

“Public universities should be held accountable to the public, and they’re not. It’s time to look under the hood and see where all this money is going.”

He also jokingly said he offered to pay his son the equivalent of four years of tuition for him to play computer games instead of going to school.

During the Q&A, Moore took several questions from the audience. The closing question asked about his points concerning skepticism of the scientific consensus.

“Most of the time the scientific consensus is right,” Moore said.

But not always, he added, pointing to past false fears about overpopulation as an example.

“One of the things I’d say about these things that become scientific consensuses is look at whether the people who are saying these things have some kind of motivation to say it,” he said. “In economics, we think incentives matter.”

“I’m not saying these people are being dishonest,” he stressed, saying he is not denying the existence of climate change. “The solution to climate change is not to shut down our energy sources,” he added. “Energy is the most important resource. If you want to drag the U.S. economy into the gutter, get rid of fossil fuels.”

He also spoke about the importance of switching to nuclear power if fossil fuels were to be eliminated.

The crowd of 75 students, faculty and alumni received Moore’s talk well, and there were no disruptions during the event.

“Thankfully, due to the work of the Cornell Republicans over the last couple of years, I think this campus is much more open to dialogue and discussion than we were even just a few short years ago,” Michael Johns, president of the College Republicans, said after the talk. “I’m really heartened by how seriously the campus takes these discussions.”