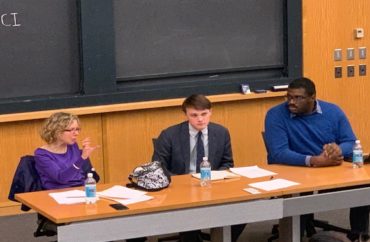 Grad student claims meritocratic system is not the best

Over the course of an hour-long debate, they discussed the topics of affirmative action, mismatch effect, and discrimination against Asian Americans at Harvard.

Mac Donald began by clarifying her definition of diversity as something beyond race and gender identity that includes ideology and worldview. And she acknowledged that this view is not one that is widely held.

“When Harvard talks about diversity, like every other selective college today, it is talking overwhelmingly about one thing: race,” she said. “This focus presupposes that race is a valid proxy for experiences, viewpoints, and even character. It is not.”

She then proceeded to discuss the lawsuit filed against Harvard, alleging that its admissions program discriminates against Asian American applicants. The trial wrapped up at the beginning of November, and the judge’s verdict may not be released until early 2019, according to NPR.

“In sum, being black quadruples your chances of being admitted to Harvard,” she said. “Being Asian drastically reduces it.”

“Asians are discriminated against for their academic hard work and success, required to present academic qualifications much higher than any other racial group to even be considered for admission because of their ethnicity,” she added.

She also discussed “mismatch effect,” which she argued catapults minority students into academic positions where they are not prepared for success.

She concluded her opening statement by claiming that colleges are going to do as much as they can to hold onto their racial preferences regime.

Davis, a black Harvard PhD candidate in African American studies, responded by contesting the role that diversity plays in admissions.

“Admissions is not about assessing individual merit, it’s not at all about that,” he said. “It’s about building a class.”

Davis proceeded to argue that race “is not meant to be a form of reparations or a form of charity. It is meant to shore up the investment that colleges make in students and in their future progeny.”

He pointed out that America is becoming a country that is becoming majority non-white, and he argued that Harvard would be remiss to have alumni who are representing a shrinking portion of the population.

He acknowledged that knowing someone’s race tells you little about them, but he said that when he was applying to school, he could not talk about himself or his experiences without talking about his race. It was his investments of communities of color that made him valuable to colleges.

Davis’s response to Mac Donald’s assertions about mismatch effect criticized her argument as justifying continued systemic disadvantages for black students throughout their education.

“She seems to be making the argument that the systematic disadvantage that follows black and Hispanic students all through K-12 education somehow justifies another systematic disadvantage in the college admissions system,” he said. “That seems backward to me, as there has to be some mechanism to overturn or uproot the systemic issues that affect students of color in education.”

He concluded by addressing the lawsuit against Harvard as being indicative of implicit bias in Harvard admissions and that the Asian population at Harvard is not representative of Asian countries as a whole. He said that the law surrounding racial discrimination does not address implicit bias.

“It is a sad, sad fact that institutions around this country can get away with non-explicit discrimination everyday,” he said. “But the solution to that issue is not to dismantle one of the only systems that has been developed to counteract it.”

The two then exchanged in some back and forth debate moderated by a member of Harvard Open Campus Initiative. Mac Donald continued her argument that mismatch effect has adverse impacts on the performance of minority students at elite universities, and that admissions should move towards a more strict meritocratic process.

Davis retorted by criticizing the notion of an entirely meritocratic process.

Mac Donald pushed back on this point by arguing that corporations are becoming as obsessed with diversity as colleges are. She also said that as private institutions, corporations have every right to use the hiring practices they choose.

During a Q&A session at the end of the debate, Mac Donald stressed the need to address the skills gap between different classes of students at an early point in their academic careers.

“College admissions has never been meritocratic, ever,” Davis said. “I don’t believe that a meritocratic system is best,” he continued.

“Qualification should be the only thing that counts,” Mac Donald replied.

MORE: Judge to decide if Harvard discriminates against Asian-Americans