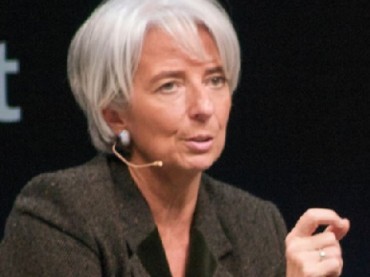 International Monetary Fund managing director Christine Lagarde has stepped down as the commencement speaker for Smith College after students and faculty protested her selection, suggesting the fund is a corrupt, imperialistic operation that oppresses developing nations and abuses women.

The protestors, in the petition, said that while Lagarde is accomplished, “at Smith College … we are taught how to stand up and fight against inequality and corruption.”

“The IMF has been a primary culprit in the failed developmental policies implanted in some of the world’s poorest countries,” stated the petition, which garnered nearly 500 signatures. “This has led directly to the strengthening of imperialist and patriarchal systems that oppress and abuse women worldwide.”

In a statement released Monday, Smith president Kathleen McCartney said Lagarde withdrew because she did not want her presence to distract from commencement festivities at the private, women’s liberal arts college in Northampton, Mass.

“In the last few days,” Lagarde wrote to McCartney, “it has become evident that a number of students and faculty members would not welcome me as a commencement speaker. I respect their views, and I understand the vital importance of academic freedom. However, to preserve the celebratory spirit of commencement day, I believe it is best to withdraw my participation.”

Lagarde’s departure makes her the third highly successful, high-profile woman to lose her role as commencement speaker this graduation season over protests.

She joins former Secretary of State Condoleezza Rice, who stepped down from the honor at Rutgers University after students and professors continually called her a war criminal, and global human rights advocate Ayaan Hirsi Ali, whose criticism of Islam got her disinvited as grad speaker at Brandeis University.

Lagarde’s withdrawal was announced Monday by Smith College campus officials. The online petition had called on school officials to “reconsider” the choice of Lagarde.

“By selecting Ms. Lagarde as the commencement speaker,” the petition reads, “we are supporting the International Monetary Fund and thus going directly against Smith’s values to stand in unity with equality for all women, regardless of race, ethnicity or class.”

One woman who signed the petition called the IMF an “imperialistic, ineffective, and oppressive” organization.

In her statement, McCartney acknowledged the apparent victory of the protesters, saying they “will be satisfied that their activism has had a desired effect.”

McCartney, however, stands by the decision of the Smith Board of Trustees to invite Lagarde.

“An invitation to speak at a commencement is not an endorsement of all views or policies of an individual or the institution she or he leads,” she continued. “Such a test would prelude virtually anyone in public office or position of influence.”

She also said disinviting Lagarde would have run contrary to Smith’s “core values of free thought and diversity of opinion.”