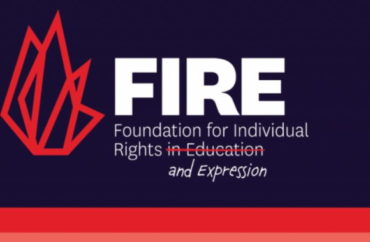 The Foundation for Individual Rights in Education, one of the oldest and most prestigious and effective groups defending free speech on college campuses, is expanding its battlefield.

FIRE recently announced it will expand into off-campus free speech advocacy. The group stated the $75 million initiative “will focus on three main areas of programming: litigation, public education, and research.”

Adam Kissel, a higher education reform visiting fellow at the Heritage Foundation who formerly worked at FIRE, said the expansion is a natural next step.

“FIRE had already expanded from its early focus on free speech defense and free speech education to address the culture for free expression on campus,” he said in an email to The College Fix. “Most colleges are not isolated from the broader culture, so it makes sense that FIRE’s work on free speech defense, education, and culture should extend beyond the campus gates.”

Kissel said the expansion will also help counterbalance the shift seen at the ACLU.

“It is widely known that the American Civil Liberties Union subordinates free speech concerns to its other values. As a result, the ACLU has almost entirely left the field,” said Kissel, who served as the deputy assistant secretary for higher education programs at the Department of Education during the Trump administration.

“FIRE, with its impeccable reputation for putting free speech first, will fill the gap, along with excellent existing groups such as the Pacific Legal Foundation and the New Civil Liberties Alliance,” he said.

“America needs a new nonpartisan defender of free speech that will advocate unapologetically for this fundamental human right in both the court of law and the court of public opinion,” he said in a news release.

The expansion includes a “Faces of Free Speech” billboard campaign and television programming that launched this month and runs through the end of 2022, the group stated on its website.

“One TV spot includes a former Emerson College student, K.J. Lynum, whose conservative group was suspended by the school’s president for circulating ‘China kinda sus’ stickers promoting the theory that a Chinese government lab caused the [outbreak] of Covid-19,” Politico reported. “…Another ad features a Montana State University student, Stefan Klaer, who was ordered to take down a Black Lives Matter banner from his dorm room window.”

According to Kissel, the free speech movement has grown a lot and reached many people who support the First Amendment.

“Free speech advocates have noticed that campus speech codes are just one part of the nationwide problem of censorship,” he said. “Many students arrive at college having been badly educated about free speech in high school.”

“…Large numbers of people now see this corporate censorship in action every day. As more corporations act like college campuses and develop their own restrictive speech codes, more and more workers see why free speech is important.”

But FIRE points out that “defending individual rights in higher education remains one of FIRE’s core competencies.”

David French, former president of FIRE and currently a senior editor at The Dispatch, and Harvey Silverglate, co-founded of FIRE and a civil liberties and criminal defense lawyer and writer, applauded the expansion.

“FIRE, in its new incarnation, will have a much broader range of opportunities to influence the culture of free speech in the greater society than the original FIRE,” the two said in a joint statement. “It will not have to have a ‘campus hook,’ so to speak, in order to take on a case or a cause.”

MORE: In 2021, 111 scholars were targeted for exercising their free speech rights