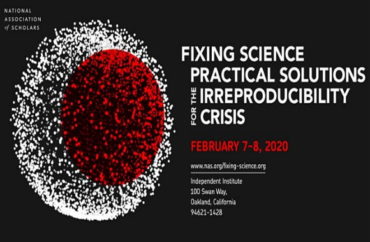 The National Association of Scholars is facing accusations of harboring a “white supremacy agenda” and of being “dangerous” over the group’s upcoming conference that will explore how a massive amount of scientific findings published in peer-reviewed journals cannot be reproduced.

Topics to be explored include “groupthink” and the so-called settled science of climate change. Other subjects to be tackled are economics and health science.

But hyperbolic criticism of the conference, which included major social media traction, has prompted two graduate students set to be speakers at the event to bow out for fear their careers could be damaged, according to organizers.

Yet the traditionalist scholarly association, which describes itself online as a group that aims to foster “intellectual freedom” and that “searches for the truth,” is moving forward with the event.

It is set for early February in Oakland, California, and titled “Fixing Science: Practical Solutions for the Irreproducibility Crisis.”

Leonid Schneider of “For Better Science” criticized the conference, noting: “The upcoming conference was much ridiculed on Twitter for being a white men-only event. A faux-pas, easily fixed by inviting some women next time and all is well. But there are much bigger problems with NAS, and climate change denialism is not the only one. Many posts on NAS website are openly misogynous and others raise the suspicion of white supremacy agenda.”

Later he insinuated NAS scholars Lee Jussim and Brian Earp “will probably come to have their egos rubbed by fellow white men of conservative persuasion.”

When asked by The College Fix if he thought it was appropriate to attribute a negative characteristic to an individual’s race while accusing others of racism, Schneider’s only response was: “If you think white men are being discriminated against, then you maybe should join NAS.”

NAS President Peter Wood said in a statement to The College Fix that “Leonid Schneider’s ‘white supremacy’ charge is an ignorant slur.”

“One doesn’t refute slurs. One calls out the ill-will and ignorance of those who hurl them,” Wood said.

Writing on the controversy in The Wall Street Journal, Wood noted the list of speakers includes no women because all declined the invitations.

Another activist, Leonid Teytelman, wrote a blog piece accusing NAS of being a conservative organization seeking “to support the Trump administration’s dismantling of environmental protections” and advised fellow scientists to avoid the conference.

“Warning: I just got an invite to ‘Fixing Science’ conference from NAS. This is not @theNASEM! It’s @NASorg, a political organization that has weaponized reproducibility to derail science policy. They are clever and dangerous,” tweeted Teytelman.

Warning: I just got an invite to "Fixing Science" conference from NAS. This is not @theNASEM! It's @NASorg, a political organization that has weaponized reproducibility to derail science policy. They are clever and dangerous. See @undarkmag's https://t.co/1owlymgAri. pic.twitter.com/uEX2m9usX5

Wood also responded to the comment in the pages of The Wall Street Journal.

“Mr. Teytelman, who holds a doctorate in computational and experimental biology and who works in the area of replication, is someone who does worthy science and deserves to be taken seriously on matters within his competence,” Wood wrote in the Journal. “But he becomes unhinged at the thought of ‘conservatives’ or ‘climate skeptics’ getting a seat at the table. And he is far from alone.”

Wood goes on to explain how “cancel culture in various forms is taking root in American science and elsewhere.”

So far, of the original 19 speakers, two have dropped out from the conference since the beginning of the controversy. According to Wood, the speakers were graduate students who feared their careers could be damaged.

“We immediately replaced them with highly qualified individuals who are further along in their careers,” Wood said. “Our disappointment is that our effort to advance scientists who are at the beginning of their careers was compromised by the bullying tactics of leftist activists. None of the other speakers wavered. Several wrote to us to say that their eagerness to attend the conference had only increased in light of the efforts of activists to force it’s cancellation.”

When asked to clarify the position of NAS on the issue of climate change, Wood stated that the organization believes “it is a worthy topic of scientific investigation.”

He said he believes questions surrounding the lack of an academic consensus on climate change should not be the sole reason to shut down a public debate, and that such action “undermines real science.”

“The NAS takes no position on the science itself — on whether significant man-made global warming exists, how much, what mechanisms might be involved, and so forth,” Wood said. “We are focused on the integrity of the process of inquiry, not the outcome of that inquiry.”