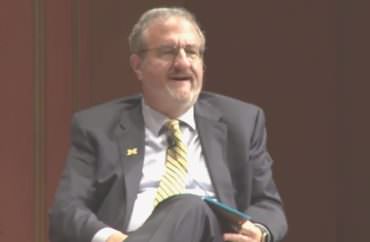 The Mackinac Center for Public Policy knew University of Michigan President Mark Schlissel loathed Donald Trump by his negative public comments about the Republican firebrand, but the free market think tank decided to dig deeper into the man who oversees the state’s flagship university and its 45,000 students.

That investigative effort spanned nearly a year, included Freedom of Information Act requests and a lawsuit, and as of yesterday ended when the public university handed over to the center several of Schlissel’s emails in which he bemoans a Trump presidency and its impacts.

The legal battle, brought on by the nonprofit to compel the university to provide the public documents, was not easy, but in the end is a victory for transparency and accountability, said Patrick Wright, Mackinac Center’s vice president of legal affairs, in an email to The College Fix.

“In a high-profile case, one of the most well-known government entities was forced to hand over documents and, in order to be more transparent in the future, make a number of internal changes to its FOIA policy,” Wright said.

The newly obtained emails include a note from Schlissel about why he decided against a “typical light feelgood convocation speech” in the summer of 2016 as the possibility of a Trump presidency loomed before the country, noting he had a room full of “first time voters” before him.

“I realize that some may interpret this as anti-Trump although there is nothing explicit in the remarks,” Schlissel said in an email about his speech to the university’s vice president for global communications and strategic initiatives.

“That’s just the way it will have to be,” he continued. “I would feel awful if Trump won the election and I was too afraid of appearing political to make any effort to encourage our students to thoughtfully participate. I am willing to accept the criticism since I think it’s very important.”

In another email, Schlissel shrugged off concerns about a University of Michigan professor who went on a self-described “rant” in class the day before the election, telling students if Trump got elected they would lose their civil liberties and that Roe v. Wade will be overturned, among other dire warnings.

That tirade was caught on video and reported on exclusively by The College Fix. When Andrea Fischer Newman, a Republican and member of the University of Michigan Board of Regents, sent the article to Schlissel, he defended the scholar.

“It’s not inherently wrong for a faculty member to take a position on any issue, including an election,” Schlissel told Newman, adding that as long as the professor accepts other views and students don’t feel “persecuted in any way,” it’s fine.

In a third email, written two days after the election, Schlissel suggested that with Trump in office it is vital the public university works in “pushing back against the idea that facts don’t matter, that science isn’t relevant to decision making, and that people with white skin don’t belong here.”

These emails and several others were effectively withheld “in violation of the Freedom of Information Act by claiming they were protected conversation under law but none of those emails met that standard,” according to the news arm of the Mackinac Center for Public Policy.

Meanwhile, the university “denies any wrongdoing” in the matter and has agreed to improve its FOIA process as part of the settlement.

When asked about the Mackinac Center’s claim that the university violated the Freedom of Information Act, University of Michigan spokesman Rick Fitzgerald referred The College Fix to a copy of the settlement agreement and a joint statement.

As part of the settlement, the university has agreed to make changes to its FOIA system in an effort to make it more efficient. Those changes in part include hiring two additional employees for the university’s FOIA compliance office.

In the joint statement, the university deflected any wrongdoing, stating there were personnel absences in the FOIA office and that the office received its highest number of requests for a month during the time of the think tank’s request.

“Regardless, this matter has highlighted opportunities for improving the university’s FOIA process,” the statement reads.

The settlement stems from a public records request filed by a reporter with the Michigan Capitol Confidential, the news outlet of the Mackinac Center, in November 2016. The publication requested any emails from University of Michigan’s President Mark Schlissel that included the word “Trump” from July 1, 2016 to Nov. 16, 2016.

The request came after Schlissel made anti-Donald Trump comments at a campus vigil following the election. Schlissel, whose comments were recorded, irked hundreds of students when he suggested Trump voters were motivated by “hate and the fractiousness and the longing for some sort of idealized version of a nonexistent yesterday.”

More than 100 days after the public records request was submitted, the think tank filed a lawsuit on March 2. That same day, the think tank received four emails, but others were withheld because the university said they were “of an advisory nature that cover purely factual materials and are preliminary to a final agency determination of policy or action.”

After reaching the settlement with the university, the Mackinac Center for Public Policy recently received the seven additional emails originally withheld.

“The emails do not contain anything that would be considered part of any ‘determination of policy or action.’ They do contain comments made by Schlissel to colleagues that are highly critical of Trump,” Michigan Capitol Confidential reported in an article published Wednesday.

In a press release, the Mackinac Center stated the emails show that Schlissel “appears to have viewed his role concerning the presidential election from a partisan perspective and was critical and dismissive of Trump supporters.”

In another of the recently obtained emails, Schlissel seems to refer to the backlash over his anti-Trump comments. In the Nov. 11 email, which has a subject line of “end of a long week,” Schlissel mentions “some complaints from our minority of Trump supporters who now feel marginalized and ostracized in our campus milieu and post election activity. Ironic.”

Schlissel, in a different email, also said he “can’t imagine lending one’s name to a Trump administration” as an appointee.