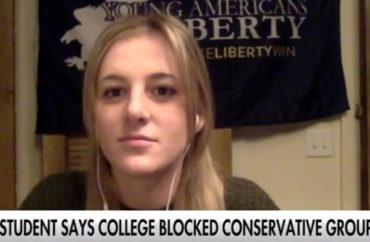 College could be engaging in deceptive practices

Alliance Defending Freedom, a nonprofit free speech group, has sent a letter to Skidmore College threatening legal action if a libertarian student group is not approved by May 21.

The private liberal arts college’s student government denied official approval to the Young Americans for Liberty chapter and student leader Hannah Davis (right) and called the views of the group bigoted and hateful according to ADF’s May 7 letter to the university. Davis had appealed the denial in March, but the Student Government Association would not budge on its decision.

University officials also said that free speech is protected on campus, except “hate speech, in which violence is clearly the goal.” A March petition titled “Stop Skidmore College from Approving the Young Americans for Liberty Club” alleged that YAL’s “proclivity to spread hatred cannot be tolerated” and cites events held by other YAL clubs several years ago.

The petition also alleged, without evidence, that YAL’s group application is a “reactionary response to students of color voicing their experiences and is an attempt to silence our voices.”

“You have denied Ms. Davis the ability to form a YAL chapter because the student government labels YAL as a hate group,” ADF said in its letter. “This is false and is quintessential viewpoint discrimination that violates Skidmore’s promises to its students.”

The nonprofit legal group said that the university has bound itself to First Amendment law by promising freedom of speech and association in its Bill of Rights and the student government bylaws.

It also accused university officials of engaging in “deceptive trade practices” and “false advertising” in violation of the New York Consumer Protection Act, because “the College has falsely promised that it will protect students’ ability to speak and associate freely.”

“Universities can’t allow harassment and intimidation of students for their political views,” Michael Ross, ADF’s attorney who authored the letter, told The College Fix via email. “Skidmore College promises all of its students that it will protect their right to speak freely and form groups based around shared interests.”

ADF attorneys said that by telling students and donors, the “consumers” of Skidmore College, that students have free speech rights on campus and then not protecting it, it is violating the law.

“Not only was [the YAL club] denied, but [Hannah Davis] has been publicly shamed by the SGA and the University and been falsely accused of engaging in hateful rhetoric,” the attorneys said.

“The College’s misrepresentations about free speech and association are thus actionable under New York consumer protection laws,” according to ADF.

“It’s a shame that Skidmore College has chosen to sacrifice the values of truth, civil discourse, and real tolerance in the name of social justice,” Sean Themea, the chief of staff for the national Young Americans for Liberty, told The Fix via email. “YAL stands with Hannah Davis, applauding this swift legal action from Alliance Defending Freedom to uphold her right to speak freely.”

The College Fix emailed Diane O’Connor, the university’s news director, on Monday and asked for comment on the letter and further explanation of the club’s denial, but did not receive a response.

The university president, Marc Conner, called the initial denial “an important part of the educative experience for our students as they freely conduct their affairs,” in a statement to the Times-Union.

It is important, Conner said, for them to “think about public discourse, civic engagement and campus culture,” explaining why he would not be getting involved.