The continuing saga over the issue of Yale fraternities having to admit women hit the courts last week as motions to dismiss the case, and oppositions to those motions, were heard by a district court.

Engender had worked out an agreement with the Sigma Phi Epsilon fraternity to allow “non-males” to rush; when none of those who rushed were admitted, however, that’s when the group looked to utilize Title IX and “Yale’s policies on gender discrimination” to force the issue.

According to the Yale Daily News, early this year three Yale female undergrads (below) filed a federal class-action complaint which Engender joined three months later. The complaint argues Yale’s fraternities “discriminat[e] on the basis of gender and of foster a sexually hostile environment.” 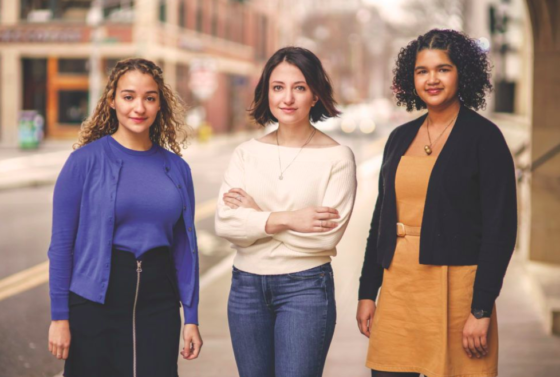 During the hearing, David Tracey ’08, one of the plaintiffs’ attorneys, said that Yale has “breached [its] promises” to its students of not tolerating sexual misconduct and providing a safe environment. He called fraternities “prestigious boys clubs” that are given the responsibility of throwing parties by the University. Tracey and his team claimed that Yale has known for at least a decade that fraternities are a “central locus of sexual misconduct” and that the University has failed to make a substantial effort to change these environments.

As part of the University’s motion to dismiss, Jessica Ellsworth, an appellate litigation partner at Hogan Lovells, argued that Yale is sympathetic to the plaintiffs’ case, but the University has no direct control over fraternities’ off-campus activities. …

In her argument, Ellsworth said that the University has worked to address issues of sexual misconduct through a variety of networks including educational programs coordinated by the Title IX office. She added that the fraternities are independent student groups, and they would not fall under the law’s purview. As such, “monitoring fraternity parties in some way” would be an incorrect application of Title IX, he [sic] said.

In a response to Yale’s motion to dismiss, the plaintiffs retorted “Nineteen years into the 21st century, this Court faces a similar case in which entrenched secular institutions bar their doors to women and deprive them of the important and extensive benefits of membership.”

There are campus organizations called sororities, of course, and Engender has “no official position” on whether they should be integrated. The reason: “[W]hereas fraternities deliberately cultivate themselves as social spaces, sororities tend towards intimate associations and do not affect wider social trends at Yale in the same manner.”

Even CBS News had issues with this sort of logic. Back when the original complaint was filed, one of its reporters asked the three plaintiffs why they would want to join a group “in which unknown individuals ‘grinded’ against them at parties.”

The response: Frat parties are “the only choice for the first couple of months at school” and “dominate the social culture” at Yale.

“Those are the places that are open late at night. And those are the spaces that some of our friends are hosting parties in,” plaintiff Ry Walker said.