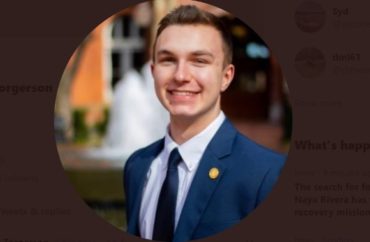 The student government at Georgetown University has passed a resolution to condemn their peer for writing a column on his personal website that stated “I love the United States of America” and criticized the Black Lives Matter movement.

In a contentious online hearing Tuesday, the Georgetown University Student Association approved the resolution by voice vote while some students cried and others struggled to breathe during heated debate over the issue.

The lone student targeted in the resolution is Georgetown University junior Billy Torgerson, a member of the College Republicans, who published a column on Independence Day that argued “The United States of America is the first country in the world that is made of free, self-governing individuals.”

“When applied correctly, our national principles are exemplary,” Torgerson wrote in his column, titled “A Nation of Virtuous Individuals” and published on his website American Buckler.

Only three student senators voiced objection to censuring their peer for his personal writings. The rest of the body voted to officially condemn the piece and called on the entire campus community to file bias reports against Torgerson as part of the approved resolution.

“[T]he rhetoric in this article is racist, ignorant, discriminatory, demeaning, and hateful,” it states.

Georgetown University’s media affairs division did not respond to an emailed request Thursday from The College Fix asking if Torgerson will face an administrative probe as a result of student leaders’ lobbying.

As for Torgerson, he’s standing his ground.

“I will never bow to a mob,” he appended to the top of his column along with a longer explanation stating that he stands behind what he wrote while also agreeing there is room for improvement on how he articulated his thoughts.

In an interview with The College Fix, he said he’s “disappointed by the outrage.”

“I knew it was going to be a big thing when I got the first harassing comments from people I don’t even know,” Torgerson said. “I’ve been opposed to plenty of things they have done since I arrived at Georgetown, so I definitely saw it coming. They do not represent the majority of students at Georgetown, in my opinion.”

He added that the mob-like cancel culture displayed in his peers is a troubling trend.

“People are afraid to speak out like I did because they will be falsely labelled,” he said. “I am not afraid of that because there are few things I cherish more than my rights. I would rather offend someone now than lose everything I hold dear in the near future.”

Torgerson, in his column, has also argued that the “Black Lives Matter is a movement entirely based in unfalsifiable ideological possession, and it does not deserve your support.”

“If you support this group, your emotions are being manipulated to push for fundamentally-incorrect solutions to problems that have many moving parts. The United States of America is not systemically racist today.”

He also criticized the recent U.S. Supreme Court decision redefining the Civil Rights Act of 1964 to include gender identity.

The student senator who brought forth the resolution, Sofia Negrete-Retamales, did not respond to a request from The College Fix seeking comment.

During the hearing, however, Senator Negrete-Retamales promised to “make sure we follow up on the resolutions we pass and make sure action is taken [so we] don’t just pass a piece of paper.”

“When the student government is in the business of condemning the students they represent, they are the ones who lose credibility, not the student,” Dai said in an interview with The College Fix.

Dai, along with student senators Joey Yacovone and Julio Salmeron-Perla, had voted against the resolution. There are a total of 22 students senators, and only one was absent from Tuesday’s meeting, according to the record.

On Torgerson’s Instagram post promoting the article, malicious comments bullied him for his name, his haircut, and even suggested his mother made a mistake giving birth to him.

Editor’s note: The story has been corrected to note there were three student senators who voted against the resolution, not two as previously stated. It also adds their names.